– Woman Fired After Photo Of Her Flipping Off Trump Motorcade Goes Viral:

Juli Briskman, a 50-year-old Virginia woman who was captured in a viral photograph flipping off the president’s motorcade as it left the Trump National Golf Club in Virginia, has been fired from her employer, a government contractor called, for allegedly violating the company’s social-media policy, the Huffington Post reported.

Briskman’s employer, Akima LLC, a construction firm that reportedly relies on government contracts for much of its revenue, was less than pleased with her newfound notoriety: They fired her for “violating their social media policy”, saying her presence at the firm could jeopardize future business with the federal government. 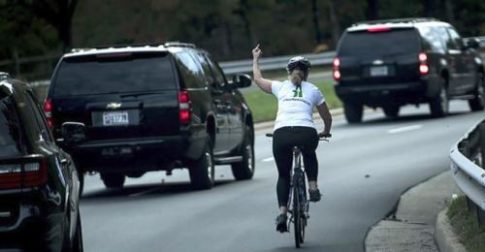 The picture, snapped by a White House photographer traveling with the president as he left his golf course in Sterling, Va., went viral almost immediately. News outlets picked up the story when it appeared in a White House pool report. Late-night talk show hosts told jokes about the encounter and people on social media began hailing the unidentified woman as a “she-ro,” using the hashtag #Her2020.

Taken aback by the sudden publicity, Briskman briefly set the photo as her profile picture, before deciding that – given the nature of her work – she would do the right thing and inform her employer of the phenomenon. Since the photo contained no hints about her association with the company, she figured she had nothing to hide, and nothing to fear.

Unfortunately, that’s not quite how things turned out.

A day later, she was summoned to her company’s HR department, where she was given the bad news.

“They said, ‘We’re separating from you,’” Briskman said. “Basically, you cannot have ‘lewd’ or ‘obscene’ things in your social media. So they were calling flipping him off ‘obscene.’”

Briskman, who worked in marketing and communications for the company for a little more than six months, said she pointed out to the executives that the incident didn’t happen when she was on the clock and that the social media posts didn’t mention her employer.

At a meeting Tuesday, her bosses told her she violated the company’s media policy by posting the photo as her profile picture on Twitter and Facebook.

Briskman criticized her former employer for firing her while declining to punish a male employee who called somebody a “fucking Libtard asshole” on Facebook. Displaying a shocking lack of self-awareness (typically of libtards everywhere), Briskman implored her former employer to justify exactly how her colleague’s Facebook comment was less obscene than her decision to personally disrespect the leader of the free world.

Briskman, a Democrat, said as the motorcade began to pass her on Oct. 28 as it returned to the White House from the Trump National Golf Course in Sterling, Va., she had a gut reaction to flip it off.

“He was passing by and my blood just started to boil,” she said. “I’m thinking, DACA recipients are getting kicked out,” she said. “He pulled ads for open enrollment in ObamaCare. Only one-third of Puerto Rico has power. I’m thinking, he’s at the damn golf course again.”

Despite being fired, she said, Briskman says she has no regrets.