The US has simultaneously deployed 7 of the 11 U.S. nuclear aircraft carriers for the first time in over a decade according to the US Naval Institute. The three aircraft carriers with full air wings and strike groups positioned in the Western Pacific are the following: USS Ronald Reagan (CVN-76); USS Nimitz (CVN-68); USS Theodore Roosevelt (CVN-71). Another four are conducting “short training missions as part of training operations or workups ahead of deployment”.  Two out of four are operating in Eastern Pacific –  USS Carl Vinson (CVN-70) and USS John C. Stennis (CVN-74) – and the remaining two are operating in the Atlantic, the USS Abraham Lincoln (CVN-72) and USS Gerald R. Ford (CVN-78). 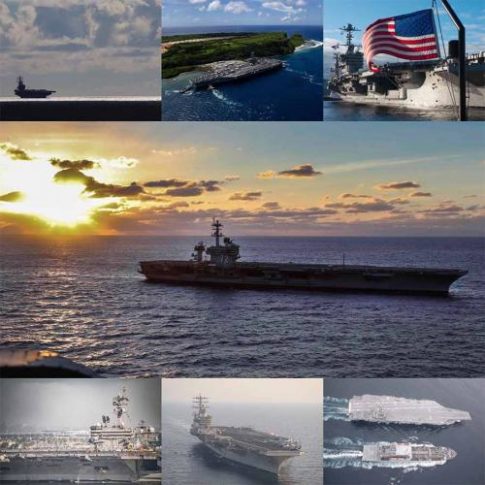 Back in 2016, six carriers were underway and that was considered a “milestone event” by Chief of Naval Operations Adm. John Richardson. The last time 7 carriers were deployed dates back to 2004, according to USNI. The report quotes an unidentified Navy official to sheds more light on the upcoming drills:

The Reagan, Nimitz and Roosevelt strike groups are all operating in the U.S. 7th Fleet area of operations. Reagan is operating in the Sea of Japan near the Korean peninsula while Nimitz is returning to its homeport at Naval Station Kitsap-Bremerton, Wash. after a deployment to the Persian Gulf to conduct air strike against ISIS targets. Roosevelt deployed from San Diego, Calif. on Oct. 7 set to replace Nimitz as part of the continued U.S. operation against ISIS.

More basic details were provided by the report for the remaining aircraft carriers:

“Naval aviation is supporting the requirements of combatant commanders forward while building our capabilities for future deployments–and qualifying new pilots–with training near our shores,” Vice Adm. Michael Shoemaker, commander Naval Air Forces said in a Monday statement provided to USNI News.
“The addition of USS Gerald Ford is exciting, as we test the capabilities for the future. This optempo is not ordinary, but the demand for carriers remains as high as ever.”

Also on Monday, VoA’s White House bureau chief Steve Herman, confirmed what had been speculated previously, namely that 3 of the carriers will participate in an extremely rare drill in “the estern Pacific”, read off the Korean peninsula. As the report states, this would be the first time the “7th Fleet converged for the “first simultaneous three-strike group training operations in a decade”.

Last week, Chairman of the Joint Chiefs Gen. Joseph Dunford tried to diffuse the situation, saying that “these three carriers are not there specifically targeting North Korea. This is a routine demonstration of our commitment to the region.” The exercise is overlapping President Trump’s 12-day excursion across Asia amid high-tensions between Pyongyang and Washington.

Indicatively, as of last week, this was the latest positioning of US Carrier Strike Groups, courtesy of Stratfor. 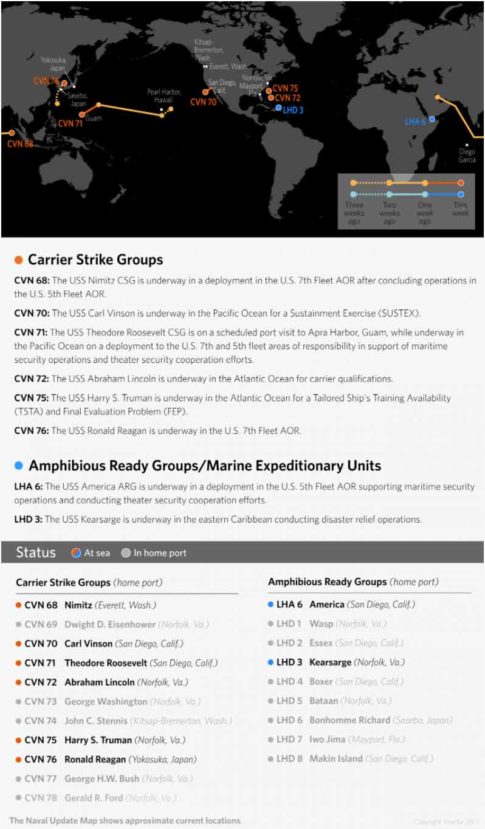 The timing of the 3-carrier drill in the Western Pacific coincides with President Trump’s trip to South Korea. As Trump’s latest tweet indicates (4:28pm), he is “getting ready to leave for South Korea”.

Getting ready to leave for South Korea and meetings with President Moon, a fine gentleman. We will figure it all out!

With 7 carriers deployed today of which 3 about to launch drills in Western Pacific, we find it odd this is all occurring around President Trump’s trip to Asia.

On October 28, North Korea accused the US of making “criminal moves for igniting a war of aggression”, after Kim Jong-Un learned three US-Navy carriers will operate in Asian waters. According to Jim Mattis, United States Secretary of Defense, said “our goal is not war, but rather the complete, verifiable and irreversible denuclearization of the Korean Peninsula”, something North Korea has previously said it will never agree to.

Finally, another drill that should be closely watched is Israel’s “largest-ever aerial military drill”, which started yesterday. Sometimes these drills “accidentally” go live.