The video above is a VERY important video with eyewitness testimony proving HAARP EMP weapons being used to start California fires. Some witnesses saw blue sparks and flashes in the sky that were NOT lightning! Some felt a weird energy in the air that made their heart palpitate! Some felt an “energy vortex” move through their homes!

A firefighter known by one of the guests on Scott Bennett’s radio show on the Rense Radio Network told some shocking details on the air! He said a cop went and knocked on the door of a house and told them they had to be out of there in one hour. The fire was nowhere around the home at that point and that’s why they had an hour. The policemen came back to that same house in 5 minutes and the house was fully engulfed in flames! No way the fire would have moved from nowhere around there to fully engulfing the house in 5 minutes! Sorry that just cannot happen!

I think they might be turning up the HAARP toys to a high level that can cause spontaneous combustion of trees or structures. All trees and structures are now covered with nano particles of aluminum. What happens when you put aluminum foil in a microwave? You get massive heat, sparks and things combust spontaneously! I think this is what’s happening! They are starting and intensifying these wildfires with microwave energy from their HAARP toys. That’s why so many fires are starting at one time and this means not enough firefighters to fight the fires. 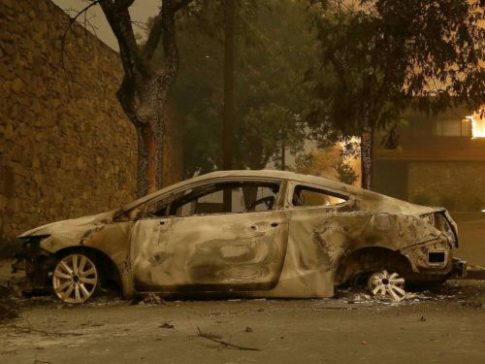 Why was the aluminum wheels on this car melted! It’s on pavement, trees aren’t burned around it and it’s protected by a brick wall that did not burn! Nothing around this car burned to generate this type of heat! This makes no sense to me unless a weapon was used in the area. You saw this same thing on the melted cars on 9/11! 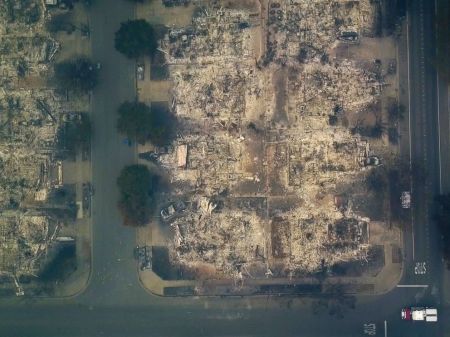 Some of the neighborhoods were burned so thoroughly there was only 2 inches of ash left of the entire house! Why are the trees not burned up in most cases? A firefighter reported to one of the radio hosts on Scott Bennett’s radio show there are over 700 are missing over the california fires! He relayed how many were burned alive in their homes or were burned trying to drive out in their cars! Reports of people driving cars that were on fire!

Something is wrong here. The firefighter reported they have never seen these types of fires before especially in October. I believe H.W. Bush and the deep state have gone insane with the weather warfare toys and plan on causing chaos to bring in their satanic new world order now before they can be arrested for treason! They want Trump dead or impeached fast but God told me his hand is on Trump and he will barely survive their evil!

Tweet this article to Trump @potus @realdonaldtrump and tell him to release the files on JFK showing all who were involved in it! Tell Trump to identify those responsible for these weather weapons we know are being used. Tell him to send in Seal Team 6 immediately to the facilities controlling the satellites and HAARP installations! I’m not joking, we must take away these toys before they burn the damn planet up! These weapons can literally kill anybody with what they are doing with them now. They’ll assassinate anybody and simply blame it on a tragic fire they started with their HAARP matches!  –    from Before its News