Remember that it has been predicted that Spian will have a civil war before WW3. 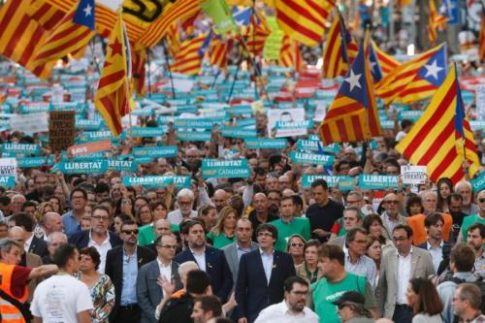 Update (1510ET): Catalan leader Carles Puigdemont addressed Catalans, Spaniards, and the rest of Europe on TV saying that the Spanish states’ imposition of Article 155 means “liquidation of our self-government and cancellation of the democratic will of Catalans”.

Puigdemont said Mr Rajoy had set out to “humiliate” Catalonia in an “attack on democracy” and said removing powers from Catalonia was the “worst attack against the institutions and the people of Catalonia since the military dictatorship of Francisco Franco”.

Puigdemont also said Spain “closed the doors ot a request for talks, and should set a date to discuss the attack” and “Catalan institutions cannot accept attack by Spain.”

In a striking accusation, the Catalan president said that “Catalan institutions dealt a coup by Spanish state.”

Puigdemont then switched to English to appeal to Europeans, says democracy also at risk in Europe: “Catalonia is an ancient European nation”. He also announced a session in Catalan parliament to debate “the attempt to liquidate our self-government”.

Puigdemont concluded by saying “Long live Catalonia” to which a silently listening crowd suddenly burst back into cheers and chanting.

However, Puigdemont did not specifically declare independence, but said Catalonia will not accept Madrid’s plan to curb region’s powers, leaving one tiny, final loophole…

As we detailed earlier, with Spain officially pulling the trigger on Article 155, and activating the Spanish Constitutional “nuclear option” this morning, when PM Rajoy said he would seize control of the Catalan government, fire everyone and force new elections in six months, attention has shifted to the Catalan response. And as we waited for the official statement by Catalan separatist president Carles Puigdemont, expected at 9pm local time, we found him taking to the streets, where he led hundreds of thousands of independence supporters in protest around Barcelona on Saturday, shouting “freedom” and “independence” following the stunning news from Madrid earlier on Saturday. 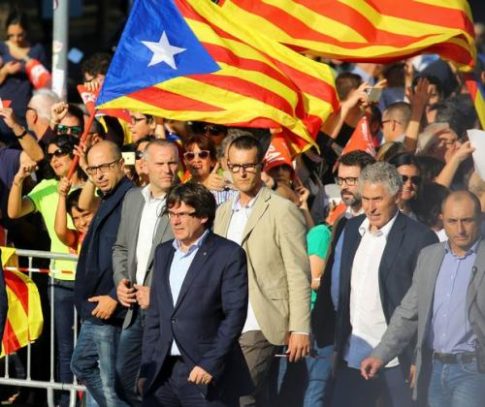 The protest in the center of the Catalan capital had initially been called to push for the release of the leaders of two hugely influential grassroots independence organisations, accused of sedition and jailed pending further investigation. But it took on an even angrier tone after Prime Minister Mariano Rajoy announced his government would move to dismiss the region’s separatist government, take control of its ministries and call fresh elections in Catalonia.

According to municipal police, over 450,000 people rallied on Barcelona’s expansive Paseo de Gracia boulevard, spilling over on to nearby streets, many holding Catalonia’s yellow, red and blue Estelada separatist flag.

Protesters greeted Puigdemont’s arrival at the rally with shouts of “President, President.” The rest of his executive was also there.

For at least some locals, the time to split from Spain has come: “It’s time to declare independence,” said Jordi Balta, a 28-year-old stationery shop employee quoted by AFP, adding there was no longer any room for dialogue.

Others disgree: “The Catalans are completely disconnected from Spanish institutions, and particularly anything to do with the Spanish state,” said Ramon Millol, a 45-year-old mechanic.

Meritxell Agut, a 22-year-old bank worker, said she was “completely outraged and really sad.” “They can destroy the government, they can destroy everything they want but we’ll keep on fighting.”

Catalonia is roughly split down the middle on independence, but residents cherish the autonomy of the wealthy, northeastern region, which saw its powers taken away under the dictatorship of General Francisco Franco. Which is why, as many have warned, Madrid’s move could anger even those against independence.

Barcelona’s Mayor Ada Colau, who opposes the independence drive, tweeted: “Rajoy has suspended the self-government of Catalonia for which so many people fought. A serious attack on the rights and freedoms of everyone.” 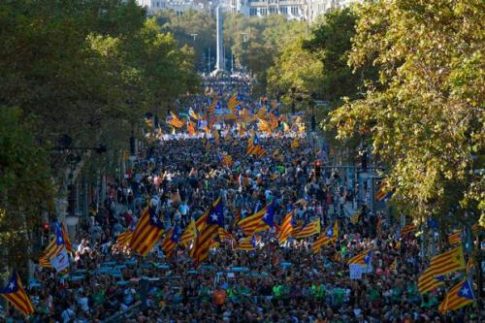 Meanwhile, the anger keeps rising: as a police helicopter hovered above, protesters booed and gave it the finger. “I wish they would just go,” said Balta, looking up at the sky.

The Spanish government’s proposed measures still have to be approved by the Senate. But the upper house is majority-controlled by Rajoy’s ruling Popular Party and he has secured the support of other major parties, meaning they will almost certainly go through.

Puigdemont is expected to make a statement at 9 p.m. For Catalonia, and Spain, it will – literally – mean the difference between independence and remaining part of Spain. It could also mean the difference between peace and a violent crackdown by Madrid on what it has seen since day one as an illegal independence process. For the Catalan leader, the stakes are huge:  El Pais reported Puigdemont faces a charge of sedition, punishable by up to 30 years in prison, if he formally declares independence or tries to change the Spanish constitution.