– Assange Thanks US Govt For His 50,000% Gain On Bitcoin As Russia Unveils ‘CryptoRuble’

Once again the unintended consequences of government intervention are exposed…

In 2010 – following the release of sensitive government documents related to wars in Afghanistan and Iraq – John McCain and Joe Lieberman led a bipartisan attempt to cut off WikiLeaks funding by forcing ‘traditional’ payment systems to block them. 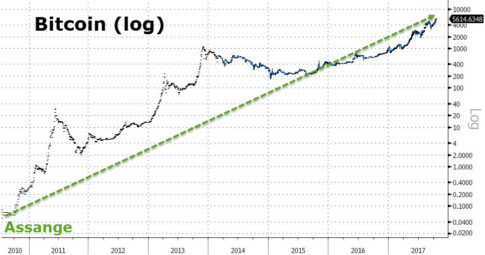 My deepest thanks to the US government, Senator McCain and Senator Lieberman for pushing Visa, MasterCard, Payal, AmEx, Mooneybookers, et al, into erecting an illegal banking blockade against @WikiLeaks starting in 2010. It caused us to invest in Bitcoin — with > 50000% return. pic.twitter.com/9i8D69yxLC

As CoinTelegraph concludes, Wikileaks has been on the forefront of revealing government corruption, and Assange has lived as a fugitive in the Ecuadorian Embassy in London since 2012. With all the antigovernment rhetoric, it’s no wonder Assange is not friendly with pro-government fiat currencies. Wikileaks and its founder represent the sort of non-governmental control that Bitcoin is founded upon.

And while governments around the world play ‘pass the hot potato’ with their regulatory crackdowns on cryptocurrencies, it appears – after denouncing Bitcoin earlier in the week – that Russia has accepted the inevitability of digital currencies… and created its own. 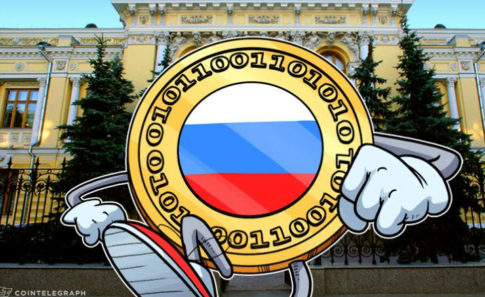 As CoinTelegraph reports, Russian President Vladimir Putin has officially stated that Russia will issue its own ‘CryptoRuble’ at a closed door meeting in Moscow, according to local news sources.

The news broke through Minister of Communications Nikolay Nikiforov.

According to the official, the state issued cryptocurrency cannot be mined and will be issued and controlled and maintained only by the authorities.

“I confidently declare that we run CryptoRuble for one simple reason: if we do not, then after 2 months our neighbors in the EurAsEC will.”

While the announcement means that Russia will enter the cryptocurrency world, it is in no way an affirmation or legalization of Bitcoin or any other decentralized cryptocurrency. On the contrary, Putin quite recently called for a complete ban on all cryptocurrencies within Russia. The statement from Putin seemed apparently to contradict the earlier comments from other ministers who seemed pro-crypto, but only with regulations, as well as Putin’s recent meetings with Buterin and others.

Now, with the issuance of the CryptoRuble, the apparent contradiction has been made clear.