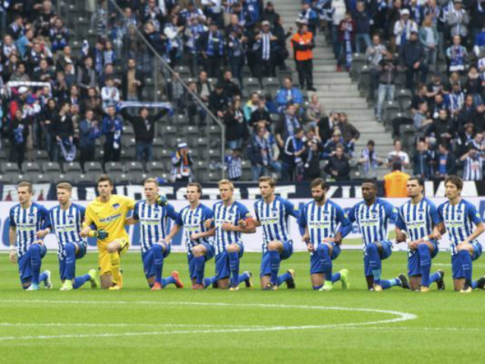 – German Soccer Team ‘Takes a Knee’ in Show of Solidarity with NFL Players:

BERLIN (AP) — Hertha Berlin nodded to social struggles in the United States by kneeling before its Bundesliga game at home on Saturday.

Hertha’s starting lineup linked arms and took a knee on the pitch, while coaching staff, officials and substitutes took a knee off it.

On Twitter, the Bundesliga club says, “Hertha BSC stands for tolerance and responsibility! For a tolerant Berlin and an open-minded world, now and forevermore!”

Meanwhile the ever so tolerant Germans are ‘losing’ Berlin…

…to diversity and tolerance…

“The area around the Alexanderplatz metro in Berlin has become a centre for migrant youth gang violence and drugs, leaving the police to lose control and the district to demand more resources to fight the lawlessness.

The situation around Alexanderplatz has rapidly deteriorated due to the ongoing fights between rival migrant gangs from Afghanistan, Iraq, Syria, and North Africa.”

The action was intended to show solidarity with NFL players who have been demonstrating against discrimination in the U.S. by kneeling, sitting or locking arms through the anthem before games.