A California State University, Fresno professor is defending his tweet stating that “Trump must hang,” which led to his suspension earlier this year. 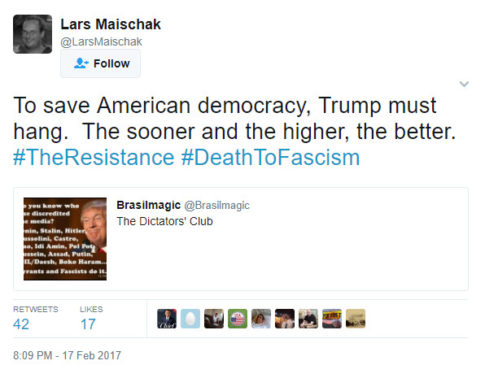 Lars Maischak spoke publicly about the incident for the first time in an interview with Politico published Sunday, saying he was merely describing a possible outcome, and was not endorsing violence against President Trump.

Maischak tweeted, “To save American democracy, Trump must hang. The sooner and the higher, the better. #TheResistance #DeathToFascism.”

“You can’t honestly regret saying something that was true just because of the consequences,” Maischak, who openly identifies as a Marxist, told Politico.

“I’m with [Martin] Luther on that one. Here I stand, I cannot help it.”

Maischak then tried to spin the situation into an issue of “academic freedom” and not an incitement of violence by claiming he was just spitballing his ideas over a non-academic social media platform.

After the attack this summer on Congressman Scalise, Fox News referenced Maischak and other left-wingers and said that they “bear responsibility for unsettling political discourse that has crossed the line of civility and could spawn acts such as” the shooting.

Maischak, however, insisted that his tweets were intended for academic purposes only, saying he was only trying to highlight the historical fact that the leaders of fascist governments have often been executed by political opponents.

In addition to the tweet calling for Trump’s execution, Maischak also expressed a desire “for the execution of two Republicans for each deported immigrant.” The tweets were so serious that the FBI investigated Maischak because of them.

While the teacher’s union to which Maischak belongs doesn’t explicitly offer protections for social media use on a personal account, Fresno State’s Faculty Senate is reportedly developing a policy related to such issues, though claims it has nothing to do with Maischak’s case.

Meanwhile, Maischak has conspired that his suspension came as a result from pressure from conservative donors to the school.

Specifically, he believes that Michael Der Manouel—a Fresno State alumnus, donor to the school’s football team, and local talk radio contributor—pressured the school to prevent him from teaching during the spring semester, though his  only evidence of this claim is that Der Manouel and president of the school had a meeting together.