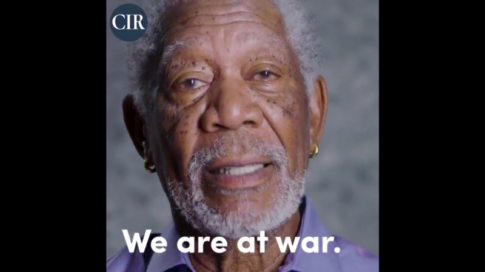 We need our president to speak directly to us and tell us the truth. We need him to sit behind the desk in the Oval Office and say, “My fellow Americans. During this past election, we came under attack by the Russian government. I’ve called on Congress and our intelligence community to use every resource available to conduct a thorough investigation to determine exactly how this happened.”

The free world is counting on us for leadership. For 241 years, our democracy has been a shining example to the world of what we can all aspire to. And we owe it to the brave people who have fought and died to protect this great nation and save democracy. And we owe it to our future generations to continue the fight.

Wow. There’s a lot going on there.

Firstly, the establishment narrative that Russia used cyber warfare to hand the election to Donald Trump remains wholly unsubstantiated and riddled with gaping plot holes that the US intelligence community has yet to address; there is currently no publicly available evidence whatsoever that the Russian government did what Morgan Freeman tells us it did, let alone that Donald Trump was involved in it. The Russian hacking narrative is getting flimsier by the day, with the assertion that WikiLeaks is a Kremlin proxy being sorely weakened just today by a new leak drop on Russian surveillance activities, which itself comes on the back of an extensive amount of critical Russia-related leaks that the transparency organization had already published.

Establishment loyalists only believe the Russian government hacked the Democratic party and gave its emails to WikiLeaks because pundits, politicians and celebrities have been saying this happened in an authoritative tone, not because there’s any publicly available evidence for it. In a post-Iraq invasion world, this is simply unacceptable.

THREAD: 2 yrs ago, I wrote an article highlighting the then 647,208 @wikileaks docs relating to Russia. https://t.co/WvdD2wB8ph #SpyFiles

Secondly, the assertion that America is currently at war with Russia is horrifying, and if Americans start swallowing this disgusting propaganda there’ll be no public outcry if the US really does enter into actual warfare with the only other nuclear superpower on the planet. The evidence-free assertion that America has “been attacked” is plainly geared to elicit a fear response from the video’s intended audience and manufacture support for counter-attacks and/or dangerous new cold war escalations.

Fourth, the notion that “the free world is counting” on the US for leadership is moronic flag-waving, chest-pounding bullshit. I assure you that the free world is not counting on any such thing. The idea that America is destined to occupy a dominant role in world affairs is an integral part of neoconservative PNAC doctrine, which posits that its victory in the Cold War means history has selected the United States to hold a unique position of leadership over the rest of the world. Most US military aggression since the end of the Cold War can be seen as a nonstop global disruption campaign to prevent the rise of another rival superpower like the Soviet Union, and the neocons have been responsible for spearheading this initiative.

What more is there to say? pic.twitter.com/sVCbUJOEX2

David Frum, author of President George W. Bush’s infamous “Axis of Evil” talking point, is a notorious neoconservative who has been pushing for war at every opportunity for nearly two decades. He is an unforgivable bloodthirsty psychopath, and everything he touches is cancer.

In addition to Reiner — a virulent #Resistance Clintonist and Russiagate conspiracy theorist — Frum’s advisory board for his new Committee to Start World War Three includes PNAC signatory Max Boot, who has relentlessly pushed for increased US military aggression throughout his entire career, and who once called in plain English for America to “unambiguously to embrace its imperial role.”

There’s also former Director of National Intelligence James Clapper, who has on more than one occasion voiced blatantly racist opinions about the nefarious genetic predispositions of the entire population of Russia. This eugenicist bigot’s handful of hand-picked analysts were behind the conclusions drawn in the intelligence community’s official statements regarding the alleged Russian election interference, forming both (A) the basis for the false narrative that there is unanimous consensus within the intelligence community about Russian hacking and (B) the foundation for the entire Russiagate conspiracy theory.

Also on the advisory board are Norman Ornstein of the neocon think tank American Enterprise Institute and conservative never-Trump pundit Charlie Sykes, who laughably just used the term “strange bedfellows” in reference to the idea of neoconservative Democrats working with neoconservative Republicans to advance their common goal of endless war.

As viscerally disturbing as it is to see the actor who played God conducting a brazen psy-op on the American people, it is already a well-documented fact that the CIA, the NSA and the Pentagon have been balls deep in Hollywood for decades. They’re just being more blatant about that collaboration now.

As Noam Chomsky puts it:

“Control of thought is more important for governments that are free and popular than for despotic and military states. The logic is straightforward: a despotic state can control its domestic enemies by force, but as the state loses this weapon, other devices are required to prevent the ignorant masses from interfering with public affairs, which are none of their business…the public are to be observers, not participants, consumers of ideology as well as products.”

Don’t let them control your mind. Fight the propaganda machine, disrupt their craven agendas, and wake up the others.

4 thoughts on “Spies, Hollywood And Neocons Team Up To Create New War Propaganda Firm To Push For #WW3”