Finland, Denmark and Sweden will gladly take them all in… 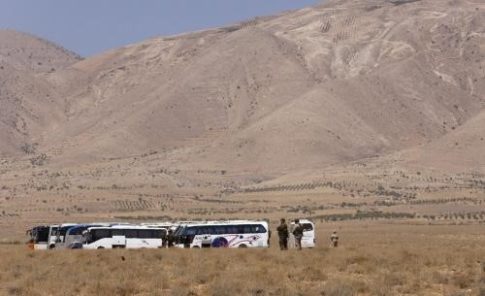 – “Like Moths To The Flame”: ISIS Fighters Cut Down While Approaching Stranded Convoy:

A convoy of buses containing hundreds of lightly armed ISIS terrorists and their family members remains stuck in the Syrian desert and pinned down as US and coalition planes continue to pick off militants who stray too far from the group. External ISIS vehicles have also tried to access and aid the group, but as US coalition spokesman Army Col. Ryan S. Dillon stated, coalition aircraft are picking them off as they come close “like moths to the flame.”

Dillon estimated that over 40 ISIS vehicles were destroyed, including nearly 100 terrorists killed, while heading toward the convoy as the coalition has been “able to continue to just observe and pick them off one at a time.” But on Friday afternoon the US alliance announced the sudden withdrawal of its surveillance aircraft over the site at Russia’s request, publishing the following statement:

At approximately 7am GMT Sept. 8, Syrian pro-regime forces advanced past the 11-bus convoy of ISIS terrorists and non-combatants in the eastern Syrian desert. To ensure safe de-confliction of efforts to defeat ISIS, coalition surveillance aircraft departed the adjacent airspace at the request of Russian officials during their assault on Dawyr Az Zawyr. 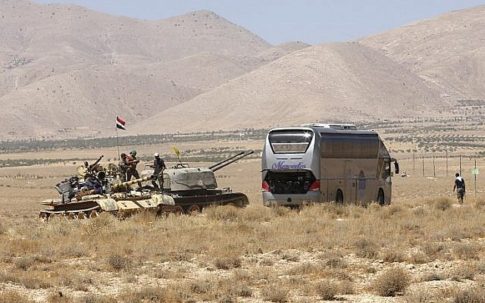 The Syrian Army and Hezbollah in the Qara area in Syria’s Qalamoun mountains when the ISIS bus convoy deal was initiated on August 28, 2017. Photo source: AFP/Louai Beshara

The convoy has been stranded in no-man’s land on the Syrian battlefield since at least last Wednesday (9/30) after its progress was halted by US coalition airstrikes along the evacuation route, including a key bridge. The Lebanese government and Hezbollah arranged a deal with Syria to allow the convoy to pass as ISIS fighters and their families were transferred from northeast Lebanon after loosing a decisive battle there. In exchange, ISIS handed over the bodies of previously kidnapped Lebanese soldiers as well as a the body of an Iranian Revolutionary Guards officer to Hezbollah.

Many false reports on #ISIS terrorist convoy. It has not reached #Iraq and will not reach Iraq. Buses still in open desert, with food/water.

The deal, which President Assad acknowledged as “an embarrassment” has been mired in controversy as it would result in experienced ISIS fighters being dropped in eastern Syria along the Iraq border. Both Iraq and the US have vociferously protested the arrangement, essentially labeling the deal an intentional terror transfer that will hinder Iraq’s ongoing anti-ISIS fight.

But US officials have failed to acknowledged that the deal was first and foremost brokered by the Lebanese government, specifically Prime Minister Saad Hariri and President Michel Aoun. A reluctant Assad agreed to let the convoy pass after the personal intervention of Nasrallah, who argued the deal would result in fewer Lebanese lives lost as the army sought to root out the final few hundred ISIS fighters in the border region of Arsal after their recent overall defeat (in what was set to be a “fight to the death” scenario). The United States has given over $1 billion in military aid to Lebanon over the past years, and itself contributed US special forces support for the successful Arsal anti-ISIS campaign. While the US coalition has highlighted Hezbollah’s role in the deal, it has conveniently side-stepped the lead role of its own allies in the Lebanese government.

For the past week and a half a catch-22 standoff has developed: Syria made a difficult and embarrassing deal – in Hezbollah leader’s Hassan Nasrallah’s words “for the sake of Lebanon” – yet it’s a deal which is going unfulfilled as the US coalition intervened to stop the evacuation. At the same time Hezbollah fighters are escorting the convoy as part of upholding its end of the bargain. Friday’s Operation Inherent Resolve statement confirms that though Russia waived off American surveillance in the area, the coalition’s stance has not changed, nor does it appear that the remaining ISIS buses have moved:

“From the start of this situation on Aug. 29, we have placed responsibility for the buses and passengers on the Syrian regime, who in conjunction with Lebanese Hezbollah brokered a deal with ISIS to move its terrorists into Iraq,” said Brig. Gen. Jon Braga, director of operations for the Coalition. “The regime’s advance past the convoy underlines continued Syrian responsibility for the buses and terrorists. As always, we will do our utmost to ensure that the ISIS terrorists do not move toward the border of our Iraqi partners,” said Braga.

The ISIS fighters and their families have continued to be provided food and water through Syrian government lines. The group exited Lebanon with 17 chartered buses along with an unknown number of individual vehicles – all attempting to make it to ISIS held Abu Kamal in Deir Ezzor Province close to the Iraq border, but that number was reduced to 11 this week as 6 buses returned to an unknown fate in Syrian government territory. In a speech announcing specifics at the beginning of the evacuation, Nasrallah put the original numbers at 308 ISIS fighters and 331 civilian family members in the convoy.  Wounded ISIS members travelling in ambulances reportedly made it to Islamic State territory ahead of the convoy last week.

The US coalition has stated its desire to separate the militants from their families in order to destroy the ISIS terrorists. Apparently there are even pregnant women in the group – this according to Hezbollah’s Al Manar news network. The US issued a statement Tuesday, saying, “Coalition leaders have communicated a course of action to the Russians, providing the Syrian regime an opportunity to remove the women and children from this situation.”

Though the whole arrangement is one of the more bizarre deals to come out of the Syrian war, it’s been widely seen as a blow to ISIS propaganda and recruiting efforts. Last week Middle East correspondent Robert Fisk reported, “some ISIS leaders in Syria did not want members of the group who had surrendered territory to be welcomed back into the so-called caliphate, and the militants should have fought to the death instead.” Other observers of Islamic State social media accounts have noted that ISIS members initially reacted in disbelief, claiming the entire brokered deal and ISIS retreat to be a fiction of Hezbollah media.

With the Syrian Army’s assault on Deir Ezzor city successfully underway, it is likely that Assad’s calculation was to allow the pressure to be let off Lebanon (and perhaps repaying a favor to Hezbollah, which has sacrificed much to defend Syria) with the thinking that the ISIS stronghold of Deir Ezzor Province would be the next to be pummeled anyway. In meantime, this stranded ISIS convoy episode continues to be among the more bizarre waiting games of the entire war.