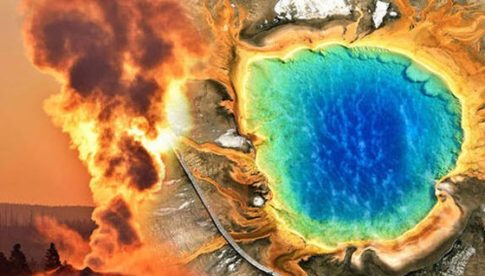 “I was a member of the NASA Advisory Council on Planetary Defense which studied ways for NASA to defend the planet from asteroids and comets,” explains Brian Wilcox of Nasa’s Jet Propulsion Laboratory (JPL) at the California Institute of Technology.

“I came to the conclusion during that study that the supervolcano threat is substantially greater than the asteroid or comet threat.”

Yellowstone currently leaks about 60 to 70% of its heat into the atmosphere through stream water which seeps into the magma chamber through cracks, while the rest of the heat builds up as magma and dissolves into volatile gasses. The heat and pressure will reach the threshold, meaning an explosion is inevitable. When NASA scientists considered the fact that a super volcano’s eruption would plunge the earth into a volcanic winter, destroying most sources of food, starvation would then become a real possibility.  Food reserves would only last about 74 days, according to the UN, after an eruption of a super volcano, like that under Yellowstone.  And they have devised a risky plan that could end up blowing up in their faces.  Literally.

Wilcox hypothesized that if enough heat was removed, and the temperature of the super volcano dropped, it would never erupt. But he wants to see a 35% decrease in temperature, and how to achieve that, is incredibly risky. One possibility is to simply increase the amount of water in the supervolcano. As it turns to steam. the water would release the heat into the atmosphere, making global warming alarmists tremble.

“Building a big aqueduct uphill into a mountainous region would be both costly and difficult, and people don’t want their water spent that way,” Wilcox says. “People are desperate for water all over the world and so a major infrastructure project, where the only way the water is used is to cool down a supervolcano, would be very controversial.”

So, NASA came up with an alternative plan: the smartest people on earth believe the most viable solution could be to drill up to 10km down into the super volcano and pump down water at high pressure. The circulating water would return at a temperature of around 350C (662F), thus slowly day by day extracting heat from the volcano. And while such a project would come at an estimated cost of around $3.46 billion, it comes with an enticing catch which could convince politicians (taxpayers) to make the investment.

“Yellowstone currently leaks around 6GW in heat,” Wilcox says. “Through drilling in this way, it could be used to create a geothermal plant, which generates electric power at extremely competitive prices of around $0.10/kWh. You would have to give the geothermal companies incentives to drill somewhat deeper and use hotter water than they usually would, but you would pay back your initial investment, and get electricity which can power the surrounding area for a period of potentially tens of thousands of years. And the long-term benefit is that you prevent a future supervolcano eruption which would devastate humanity.”

To be sure, NASA itself admitted that drilling into a super volcano comes with its own risks, like the eruption that scientists are desperate to prevent. Triggering an eruption by drilling would be disastrous.

“The most important thing with this is to do no harm,” Wilcox says. “If you drill into the top of the magma chamber and try and cool it from there, this would be very risky. This could make the cap over the magma chamber more brittle and prone to fracture. And you might trigger the release of harmful volatile gases in the magma at the top of the chamber which would otherwise not be released.”

Now, it is others’ turn to slam the NASA plan: according to a geologist at Yellowstone national park, the proposal could have dire consequences, including killing countless animals.

According to the Star, Dr Jefferson Hungerford, who works at Yellowstone, has warned NASA scientists to stay away from the volcano. He said that: “messing with a mass that sits underneath our dynamic Yellowstone would potentially be harmful to life around us.

“It would potentially be a dangerous thing to play around with.” And he questioned whether the drilling could even work, saying “we’re not there scientifically”.

More importantly, Dr Hungerford said there is no need for anything to be done proactively at Yellowstone, adding: “We won’t see [an eruption]. Very likely we will never see it.”

Perhaps he is correct: the Earth has 20 known supervolcanoes, which if they erupt, would trigger planet-changing effects. Major eruptions are incredibly rare, with the last one approximately 26,500 years ago in New Zealand. But if a similar event occurred today, it would cause a nuclear winter with humans wiped out in just a few months from starvation.

For now, what some of the smartest people in the world disagreeing on what to do next, the increasingly more precarious status quo is the most likely outcome.