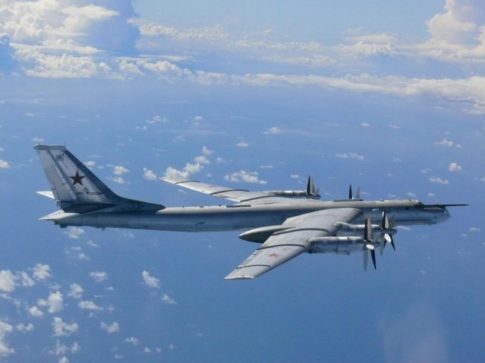 With the U.S. periodically sending the occasional sortie of B1 bombers, accompanied by South Korean fighters, over the Korean peninsula to simulate what a (very fast) war with Pyongyang would look like, the airspace over the biggest geopolitical hotspot in the world today just got a little hotter after Russia deployed nuclear-capable strategic bombers over the Pacific Ocean, the Sea of Japan, the Yellow Sea and the East China Sea, prompting Japan and South Korea to scramble jets to escort them, Reuters reported.

Russia’s Defense Ministry said in a statement the Tupolev-95MS “Bear” bombers, flew over neutral waters and were accompanied by Russian Sukhoi-35S fighter jets and A-50 early warning and control aircraft. The Russians gave no details about the overall number of aircraft that had taken part in what it called “scheduled flights over neutral waters” and did not say when or why the mission took place.

The TU-95MS bombers were refueled in mid-air during the mission, the ministry said and added that “at certain stages of the flight route, Russian strategic missile carriers were accompanied by aircraft from the Air Force of the Republic of Korea and the Air Self-Defense Forces of Japan,” the ministry said, Russian news agency TASS reported. It did not specify how many aircraft were involved or when the mission took place.

“As the Russian aircraft entered the KADIZ in formation yesterday morning, a squadron of our Air Force jets made an emergency sorties,” an official speaking on conditions of anonymity told Yonhap. As Newsweek adds, “unlike a country’s airspace, an air defense identification zone (ADIZ) is not a concept enshrined in international law. A country may declare an ADIZ unilaterally, as a way to require foreign military aircraft to identify themselves and their plans.”

While the Japanese have not yet commented on the incident, they aren’t unaccustomed to Russian bombers flying around their airspace. Japan scrambled its fighter jets in April to head off six Russian military planes—including two TU-95 bombers—that flew across the Pacific and over the Sea of Japan before returning to Russia following a course over Japan’s island of Hokkaido, without violating Japan’s airspace.

Russia, which shares a border with North Korea, has repeatedly voiced concerns over the risk of a military confrontation on the Korean Peninsula, inviting all parties to de-escalate their belligerent rhetoric. Along with China, Russia called on the U.S. to halt its annual joint military drills in South Korea, which began on Monday, in exchange for Pyongyang stopping its missile tests. Moscow, along with Beijing, has express concerns about Japan’s plan to increase its nuclear missile defense capabilities with the deployment of the land-base U.S. Aegis Ashore system, as Deputy Foreign Minister Sergei Ryabkov told Chinese and Japanese media in an interview reported in Russia’s state-run news agency Ria Novosti.

Meanwhile, in a move that will be seen as another provocation by both Russia and China, moments ago Yonhap also reported that temporary deployment of four additional THAAD launchers in South Korea is expected to be completed “in the near future.”

Speaking before a parliamentary budget committee, Chung Eui-yong, the chief of the National Security Office, was responding to a
question over whether the deployment can be completed within the year: “(We) anticipate that the deployment of four additional launchers will be completed in the near future.”

Soon after North Korea launched another long-range missile on July 28, South Korean president Moon Jae-in ordered his government to seek the deployment of additional THAAD launchers to a southern county in addition to the two already deployed launchers.

The full-on deployment of the missile defense system has been suspended pending an environmental impact assessment, which the Moon administration views as a legitimate domestic procedure for any military deployment.

Asked if the Moon administration sees the North’s freeze on its nuclear program as a condition for denuclearization negotiations, Chung said that the freeze could be an “entrance” to the negotiations. But he reiterated that the basic position of Seoul and Washington is not to accept the North’s possession of nuclear arms.

Meanwhile, with Russia now openly projecting military power above the Korean peninsula, it is only a matter of time before China does the same and the skies over the world’s most volatile, nuclear-tipped hotspot become dangerously busy.