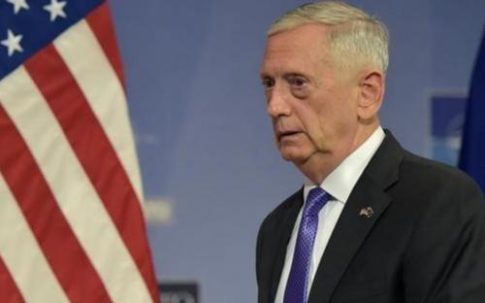 Less than a day after Joseph Dunford, the commander of the Joint Chiefs of Staff, told South Korean President Moon Jae-in that the US is ready to use “the full range of military capabilities to defend our allies and the U.S. homeland,” Defense Secretary and retired Gen. James Mattis told reporters that the situation with North Korea “could escalate into war” if the isolated country fires a missile at the US.

“If they fire at the United States, it could escalate into war very quickly,” Mattis said, according to Reuters.

Mattis also assured reporters that the US would destroy any missiles fired at the US by the North Korean regime, saying the US would know the trajectory of the missile “within moments.”

If a missile is assessed to be headed toward Guam – North Korea has repeatedly threatened the territory – Mattis said “we will take it out.”

Though it’s unclear how, exactly, the US would be able to guarantee the neutralization of an incoming missile.

While the US THAAD missile shield, which has been deployed around the world, has a solid testing record, it’s designed to target intermediate range missiles, not ICBMs. While the US has completed successful tests of ground-based anti-ICBM capabilities, its testing record for those, and for sea-based interceptors, is shaky. Some experts have compared shooting down an ICBM to “hitting a bullet with a bullet.”

“The object of our peaceful pressure campaign is the denuclearization of the Korean Peninsula. The U.S. has no interest in regime change or accelerated reunification of Korea. We do not seek an excuse to garrison U.S. troops north of the Demilitarized Zone. We have no desire to inflict harm on the long-suffering North Korean people, who are distinct from the hostile regime in Pyongyang.”

In the editorial, they also noted that while diplomacy is the US’s top priority, “it is backed by military options.”

“While diplomacy is our preferred means of changing North Korea’s course of action, it is backed by military options. The U.S. alliances with South Korea and Japan are strong. But Pyongyang has persistently rebuffed Seoul’s attempts to create conditions whereby peaceful dialogue can occur, and has instead proceeded on its reckless course of threats and provocation. As a result of these dangers, South Korea’s new government is moving forward with the deployment of U.S. Terminal High-Altitude Area Defense against the threat. We commend South Korea’s decision to deploy this purely defensive capability.”

Tensions between the US and North Korea started escalating this year as North Korea accelerated the pace of its missile testing: It has already engaged in 14 such tests this year, including its July 4 test of an intermediate-range missile that could have reached Alaska. Not only is the North now capable of launching an ICBM that can hit the US mainland, US intelligence has confirmed that it’s likely the North possesses a nuclear warhead small enough to fit inside of one of these missiles. The latest round of back-and-forth sniping between the US and the North began after the United Nations passed new sanctions against the North Korean regime with the full blessing of Russia and China, though those sanctions are expected to come down hardest of North Korean laborers and fishermen.