– Rebellion At The NYTimes: Newsroom To Walk Out After “Decrying Direction Of Paper”:

Exhausted and demoralized after repeated buyouts and cutbacks in the newsroom, it seems the downtrodden journalists at the New York Times have finally had enough: In a pair of letters delivered to executive editor Dean Baquet and managing editor Joseph Kahn, the News Guild of New York said the New York Times editorial staff will leave the newsroom on Thursday as a demonstration of solidarity as management threatens jobs, according to MarketWatch.

Unlike the employee rebellion at the Wall Street Journal last year, when staffers confronted management about unequal pay practices and a paucity of female reporters and editors in leadership roles, the uproar at the times is centered around the repeated paycuts and cutbacks, which have left the newsroom feeling “demoralized.” One letter was sent by the organization’s copy editors, who are facing dramatic staffing cuts, while the second letter was sent by reporters in an expression of solidarity with the editing staff. Both detailed frustrations with the repeated rounds of buyouts, and the lack of transparency surrounding management’s decisionmaking.

“In the copy editors’ letter to Baquet and Kahn, they say they feel betrayed and disrespected in the newsroom, and ask that management reconsider staffing cuts that are expected as the paper plans to restructure.

“Cutting us down to 50 to 55 editors from more than 100, and expecting the same level of quality in the report, is dumbfoundingly unrealistic,” the letter reads. “You often speak about the importance of engaging readers, of valuing, investing and giving a voice to readers. Dean and Joe: We are your readers, and you have turned your backs on us.”

“Editors — and yes, that especially means copy editors — save reporters and the Times every day from countless errors, large and small,” they say in the letter. “Requiring them to dance for their supper sends a clear message to them, and to us, that the respect we have shown the Times will not be reciprocated.”

The editorial staff is accusing Times management of being too opaque in its efforts to restructure the news operation, which includes consolidating two separate groups of editors into one group and asking copy editors to resubmit applications for roles in the newsroom. 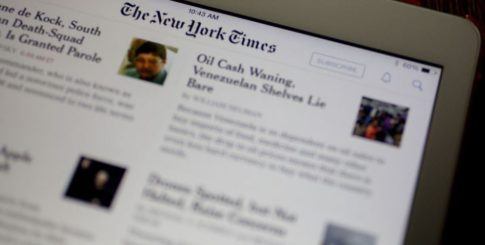 Indeed, morale is so low at the NYT that its reporters and editors said they actually feel more respected by readers than by management. The letters referenced an internal report in which the copy editors were compared to dogs urinating on fire hydrants.

That’s quite the claim  – considering President Donald Trump’s relentless bashing of the “failing” news organization has turned public sentiment squarely against it.

“And that is why it feels like such a profound waste that morale is low throughout the newsroom, and that many of us, from editors to reporters to photo editors to support staff, are angry, embittered and scared of losing our jobs,” the letter reads.

The rebellion comes at a time when advertising revenues for print – formerly a powerhouse of the media industry that has been precipitously eroded by the rise of free news on the internet – continue to shrink, and gains in digital advertising are failing to make up the difference.

In the first quarter, print ads declined by 18% while digital ad revenue increased by nearly 19% and accounted for more than 38% of the company’s total ad revenue. Still, the paper’s stock remains buoyant; shares have risen more than 35% year-to-date, compared with a 9% gain in the S&P 500.