According to the latest DOJ comments, the White House was only informed of Rosenstein‘s decision to appoint a Special Counsel in the Russian probe after the order was signed.  Per Bloomberg:

The Department of Justice has announced the appointment of former FBI Director Robert Mueller as Special Counsel to oversee the federal investigation into Russian interference in the 2016 election, including potential collusion between Trump campaign associates and Russian officials.

Acting Attorney General Rod Rosenstein made the decision to appoint Mueller, the Justice Department told reporters Wednesday. It isn’t clear if Trump had a role in the decision, Bloomberg reported.

The appointment of Mueller, who oversaw the FBI during the Sept. 11, 2001 attacks, comes at a time when the White House is reeling from Trump’s decision to fire FBI Director James Comey and allegations that Trump asked Comey in February to end his probe of former National Security Advisor Michael Flynn.

While it’s often difficult to predict how politicians will react, the appointment of Muller should ease some of the tensions and gridlock in Washington DC as it should be seen as an overture to Democrats who have been demanding just this from the DOJ.

Additionally, since the Trump administration would likely not have conceded to this appointment if it had something material to hide, it will be perceived as validating, at least initially, Trump’s claims that he has not colluded with Russia, although the risk of a potential surprise announcement by the Special Counsel will linger as a cloud over the White House – and markets – for months to come.

According to the DOJ press release, Acting AG Rosenstein felt it was “in the public interest” to appoint Meuller and has made assurances that he will be allowed to operate with a “degree of independence” from the DOJ.

“In my capacity as acting Attorney General, I determined that it is in the public interest for me to exercise my authority and appoint a Special Counsel to assume responsibility for this matter.  My decision is not a finding that crimes have been committed or that nay prosecution is warranted.  I have made no such determination.  What I have determined is that based upon the unique circumstances, the public interest requires me to place this investigation under the authority of a person who exercises a degree of independence from the normal chain of command.”

“Considering the unique circumstances of this matter, however, I determined that a Special Counsel is necessary in order for the American people to have full confidence in the outcome.  Our nation is grounded on the rule of law, and the public must be assured that government officials administer the law fairly.  Special Counsel Mueller will have all appropriate resources to conduct a thorough and complete investigation, and I am confident that he will follow the facts, apply the law and reach a just result.”

Here is the full press release from the DOJ: 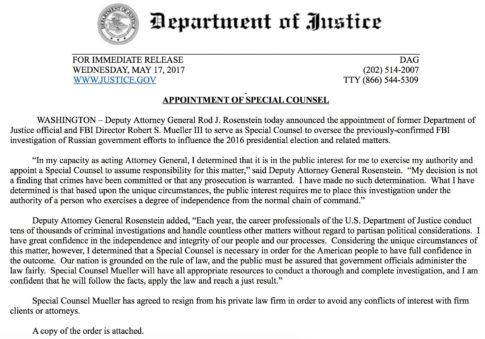 And here is the full order:

Mueller, 72, was appointed FBI Director by President George W. Bush in 2001 and served until 2013, when Comey took over. The DOJ has confirmed he will resign from his private law firm to avoid any conflicts of interest.  In the aftermath of the Sept. 11 attacks, as the U.S. was ramping up security, he joined then-Deputy Attorney General Comey in threatening to resign if the White House overruled a Justice Department opinion that domestic wiretapping without a warrant was unconstitutional.

Mueller is rumored to be bringing along Jim Quarles, who worked on Watergate, and Aaron Zebley, his (and Comey’s) former Chief of Staff at the FBI.

Hearing Mueller is bringing with him Jim Quarles, who worked on Watergate & Aaron Zebley, Mueller’s (and Comey’s) fmr CoS at the FBI.

Attorney General Jeff Sessions previously recused himself from any involvement in the Russia investigation due to is role as a prominent campaign adviser and surrogate.

Mueller’s appointment aims to quell the wave of criticism that President Donald Trump and his administration have faced since Trump fired FBI Director James Comey last week in the middle of the FBI’s intensifying investigation into contacts between Trump campaign associates and Russian officials. That criticism swelled on Tuesday evening as excerpts of a memo Comey wrote in February surfaced, in which Comey writes Trump asked him to drop the FBI investigation into former national security adviser Michael Flynn.

As Bloomberg adds, unlike Comey, who Trump charged was a “showboat” and a “grandstander,” Mueller typically shied away from making comments to reporters and routinely refused to discuss ongoing investigations. He also won wide praise as FBI director from Democrats and Republicans in Congress, an attribute that may help steady concerns about the handling of the Russia probe.

While it’s unclear how Democrats will feel about Mueller specifically, Jason Chaffetz seems to like the selection:

“Mueller is a great selection.  Impeccable credentials. Should be widely accepted.”

Mueller is a great selection. Impeccable credentials. Should be widely accepted.

And, for once, even the Democrats are pleased. Senate Minority Leader Chuck Schumer has just confirmed that he now has “significantly greater confidence that the investigation will follow the facts wherever they lead.”

Schumer on
special counsel: “I now have significantly greater confidence that the
investigation will follow the facts wherever they lead.” pic.twitter.com/RMEpHuHi25

Meanwhile, Rep. Elijah Cummings, the top Democrat on the House Oversight Committee, said “I think that’s probably a good choice. I’ve been impressed by him.”

As for markets, the reaction will likely be seen as favorable at least in the short term, as it will provide a much-needed degree of focus – and signal – and redirect attention from the epic noise and chaos unleashed by the White House, and toward the upcoming probe; in doing so it will also likely put a halt of the Hill’s various piecemeal investigations.

You’d have to guess that this stops all the Hill investigations https://t.co/Q1JxNGavQ1