– The Map They Don’t Want You To See: Nations With The Most Refugees Have The Most Terror Attacks:

The globalists who run the governments and the media outlets in Europe will never admit the truth about the refugee crisis. They’ll never admit that there is a direct link between opening their nation’s borders to people from chaotic war-torn nations, and horrific terrorist attacks. They’re constantly reassuring their citizens that they have nothing to worry about from refugees who come from terror prone regions, and to suggest otherwise is racist and Islamophobic.

In fact, rather than admitting that the refugee community is riddled with terrorist sympathizers, and that this is a problem that needs to be addressed, the globalist try to normalize terrorism.

In Sweden, the government tries to rehabilitate and reintegrate ISIS fighters who have returned to their country. They give them free “housing, employment, education and financial support” rather than throwing them in jail. And in the UK, London mayor Sadiq Kahn has tried to convince everyone that terror attacks are “part and parcel of living in a big city.”

In reality, terrorism isn’t a normal part of living in a big city, or anywhere else for that matter, and it certainly shouldn’t be normalized. Instead, the source of these attacks should be addressed. And the main source of terrorism in the Western world is clearly the millions of unvetted migrants who have arrived here. The proof of this fact is in the form of map that you will never see in any mainstream news channel or publication.

Below is an image that shows every attempted or completed terrorist attack that has occurred in Europe since 2012. Notice anything? 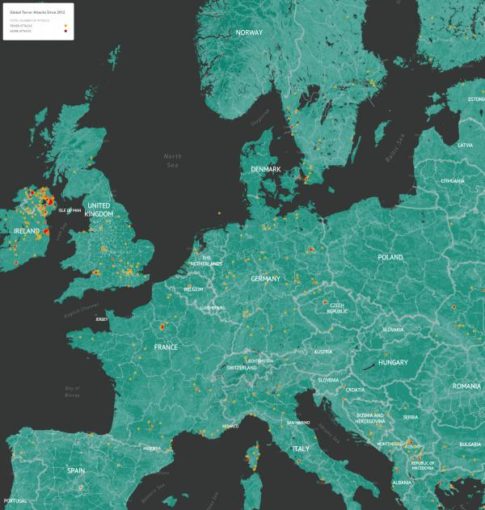 The nations that have become the hottest destinations for refugees, are also the nations with the most terrorist attacks. France, Germany, Sweden, and the UK are brimming with terror incidents. Meanwhile, countries that didn’t take in so many refugees, like Poland, Slovakia, and the Baltic states, have very few terrorist attacks or none at all.

If you click on the link provided above the image, and scroll around the map, you’ll find that there are only few European countries that have faced numerous terror related incidents, despite not admitting very many refugees. There’s Ireland, where most of those red and orange dots appear to be foiled bomb plots; most likely related to Irish dissidents. In the Czech Republic, the handful of attempted attacks were caused by leftist radicals. And in Ukraine, most of the attacks are related to that nation’s internal struggle with Russian separatists.

Obviously there’s a link between admitting countless refugees from the Middle East, and domestic terrorist attacks. Our government knows this as well. For instance, a few days before FBI director James Comey was ousted by Trump, he stood before a Senate committee and admitted that 15% of his agency’s terror related investigations involved refugees. That’s a shocking number when you consider that the US admitted 85,000 refugees last year, and the percentage of the population that would consider themselves to be refugees is probably less than 1%.

The solution to this problem is obvious, and it’s a solution that Western globalists will never consider. Either we thoroughly vet refugees who want to flee to our country, or we don’t let them in at all.