– Turkey Vows “Harsh Retaliation” After Dutch PM Says “Not Apologizing, Are You Nuts”:

The diplomatic scandal between Turkey and the Netherlands deteriorated overnight, when Prime Minister Binali Yildirim warned on Sunday that Turkey would retaliate in the “harshest ways” after Turkish ministers were barred from speaking in Rotterdam, leading to a major protest in front of the Turkish consulate in Rotterdam, while the Dutch embassy in Istanbul was closed off due to “safety concerns.”

“This situation has been protested in the strongest manner by our side, and it has been conveyed to Dutch authorities that there will be retaliation in the harshest ways … We will respond in kind to this unacceptable behavior,” Yildirim said in a statement. 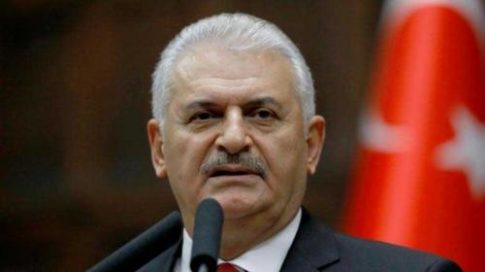 At the same time, continuing his ongoing tirade in which he has compared virtually all of his political foes to Hitler or Nazis, president Tayyip Erdogan said “Nazism is still widespread in the West” after the Netherlands joined other European countries worried about political tensions inside Turkey spilling beyond its borders that have prevented Turkish politicians from holding rallies.

In another comment, the Turkish leader urged unspecified international organizations to “raise their voices” and impose sanctions on the Netherlands, according to the AP.

As reported on Saturday, the Dutch government first barred Turkish Foreign Minister Mevlut Cavusoglu from flying to Rotterdam and later stopped Family Minister Fatma Betul Sayan Kaya from entering the Turkish consulate in the port city, before escorting her out of the country to Germany.

Dutch police used dogs and water cannon early on Sunday to disperse hundreds of protesters waving Turkish flags outside the consulate in Rotterdam. Some threw bottles and stones and several demonstrators were beaten by police with batons, a Reuters witness said. Meanwhile, Dutch officers carried out charges on horseback. 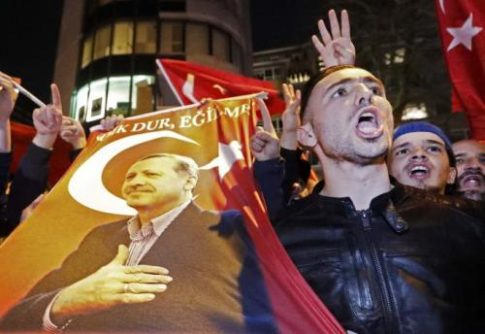 Protesters also gathered outside the Dutch embassy in Ankara and consulate in Istanbul, throwing eggs and stones at the buildings.

The Dutch government, which is set to lose about half its seats in elections this week as the anti-Islam party of Geert Wilders makes strong gains, said the ministers’ visits were undesirable and it would not cooperate in their political campaigning in the Netherlands.

Erdogan warned the Netherlands that “if you can sacrifice Turkish-Dutch relations for an election on Wednesday, you will pay the price,” during an awards ceremony in Istanbul. “I thought Nazism was dead, but I was wrong. Nazism is still widespread in the West,” he said. “The West has shown its true face.” Speaking to reporters before a public appearance in the northeastern French city of Metz, Cavusoglu said Turkey would continue to act against the Netherlands until it apologizes.

Meanwhile, Dutch Prime Minister Mark Rutte said he would do everything to “de-escalate” the confrontation, which he described as the worst the Netherlands had experienced in years. But he said the idea of apologizing was “bizarre”.

“This is a man who yesterday made us out for fascists and a country of Nazis. I’m going to de-escalate, but not by offering apologies. Are you nuts?” he told a morning talk show.

Supporting Rutte’s decision to ban the visits, the Dutch government said there was a risk of Turkish political divisions flowing over into its own Turkish minority, which has both pro- and anti-Erdogan camps. It cited public order and security worries in withdrawing landing rights for Cavusoglu’s flight.

Turkey fired back saying the Dutch ambassador to Ankara should not return from leave “for some time”. Erdogan is looking to the large number of Turks living in Europe, especially in Germany and the Netherlands, to help secure victory next month in a referendum that would give the presidency sweeping new powers.

Concerns about Turkey’s erratic diplomacy spread to Germany where Chancellor Angela Merkel said she will do all she can to prevent Turkey’s domestic tensions spreading onto German territory. Austria and Switzerland have also canceled Turkish rallies due to the escalating dispute. A senior member of her conservative bloc in parliament, Hans Michelbach, demanded on Sunday that the EU stop aid to Turkey and ruled out any hopes that it would join the EU. “There is no prospect of entry in the long run. Turkey is getting further and further away from the European Union. Support programs (that it gets as an EU candidate) are therefore a waste of taxpayers’ money,” he said in a statement.

In what may have been the harshest recent diplomatic takedown of Turkey, Michelbach said that “it is time that the EU stops performing like a diplomatic paper tiger towards Ankara. Europe must not be led by the nose round the Turkish election arena.” Needless to say, such a move would delight Putin as the Kremlin has been aggressively courting Erdogan and Turkey as Russia seeks to make headway with its new middle-eastern Axis which also includes Syria and hopes to add Iran.

In the near-term, however, the outstanding question is how will Saturday’s events impact Wednesday’s Dutch general election, and whether the diplomatic clash will boost votes for Geert Wilders. As Reuters notes, “the diplomatic row comes in the run-up to the coming week’s Dutch election in which the mainstream parties are under strong pressure from the far-right party of Geert Wilders.”

After Kaya, the Turkish family minister, was escorted out of the country, Wilders told her on Twitter “go away and never come back”.

Erdogan’s spokesman responded by saying the Netherlands had bowed to anti-Islam sentiment.

In a sign the row could spread further, the owner of a venue in Sweden where a senior official from Turkey’s ruling party had been due to hold a rally on Sunday canceled the rental contract, Turkey’s private Dogan news agency reported. The news agency said the owner had not given a reason for their decision. Cavusoglu also decided against traveling to Zurich, Switzerland, for an event on Sunday after failing to find a suitable venue. Zurich’s security authorities had unsuccessfully lobbied the federal government in Bern to ban Cavusoglu’s appearance.

4 thoughts on “AND NOW: Turkey Vows “Retaliation In The Harshest Ways” After Dutch PM Says “Not Apologizing, Are You Nuts””