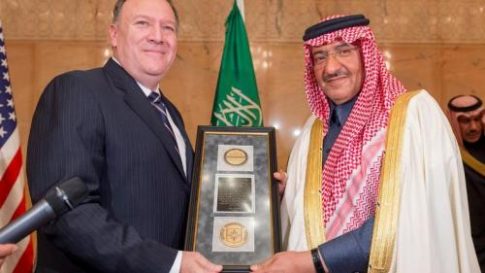 The medal, named after George Tenet, was handed to him by CIA Director
Micheal Pompeo after the Crown Prince received him in Riyadh

– Not The Onion: Saudi Crown Prince Receives CIA Medal For “Efforts Against Terrorism”:

We are sad to report that despite the change in administration, the “new” CIA is exactly the same as the “old” one.

In a stunning mockery of fact, either real, “alternative” or gratuitously made up, on Friday the Saudi Crown Prince Mohammed bin Nayef bin Abdulaziz al-Saud, who is also Deputy Prime Minister and Minister of Interior, received a medal from the CIA for his distinct intelligence-related counter-terrorism work and his contributions to ensure international peace and security, Al Arabiya proudly reported.

The medal, named after George Tenet, was handed to him by the new CIA Director Micheal Pompeo after the Crown Prince received him in Riyadh on Friday in the presence of Deputy Crown Prince Mohammad bin Salman al-Saud, Deputy Prime Minister and Minister of Defense. The meeting came days after the Washington Times reported that Trump is set to unblock a multi-billion weapons shipment to Saudi Arabia and Bahrain, including precision-guided missile technology and dozens of F-16s fighter jets.

Taking the farce further, the Crown Prince – who until just a few months ago was a fervent supporter of Hillary Clinton yet appears to have changed his mind about Trump on a dime, just like every Wall Street hedge fund – said in a press statement after receiving the medal that he appreciated the CIA honor, stressing that his efforts were guided by the leaders of Saudi Arabia headed by King Salman bin Abdulaziz al-Saud, as well as the efforts of the Kingdom’s security forces.

With regards to terrorism in the region, the Crown Prince said all religions are separate from the beliefs and actions of extremist groups, noting that religious, political and social groups who have used religion as a tool throughout history do not reflect the absolute truths about the religion which it is affiliated to, or attributes its actions to.

As expected, the prince was silent about the recently leaked email, courtesy of the Podesta files, in which Hillary Clinton admitted that Qatar and Saudi Arabia “are providing clandestine financial and logistic support to ISIL and other radical Sunni groups in the region”, to wit:

Armed with proper equipment, and working with U.S. advisors, the Peshmerga can attack the ISIL with a coordinated assault supported from the air.  This effort will come as a surprise to the ISIL, whose leaders believe we will always stop with targeted bombing, and weaken them both in Iraq and inside of Syria.  At the same time we should return to plans to provide the FSA, or some group of moderate forces, with equipment that will allow them to deal with a weakened ISIL, and stepped up operations against the Syrian regime.  This entire effort should be done with a low profile, avoiding the massive traditional military operations that are at best temporary solutions.  While this military/para-military operation is moving forward, we need to use our diplomatic and more traditional intelligence assets to bring pressure on the governments of Qatar and Saudi Arabia, which are providing clandestine financial and logistic support to ISIL and other radical Sunni groups in the region.

Instead, Al-Saud said Saudi Arabia has played a key role in the fight against terrorism and condemns all forms and manifestations of terrorism. “We, God willing, continue to confront terrorism and extremism everywhere, and with thanks to God we have managed to thwart many terrorist plots from occurring.”

And yet, if they do occur, we will make sure to know when, where and how, because we orchestrated them in the first place, he could have added, but did not and instead stressed that the fight against terrorism is a shared international responsibility that requires international efforts at all levels to confront it militarily and intellectually, as well as financially. This must be done within the framework of international law and the principles of the United Nations.

More importantly, the Crown Prince then tipped his cards and said that with regards to the relations between Saudi Arabia and the US, the Crown Prince said: “Our relationship with the United States is historical and will continue to succeed.”

Addressing the issue of possible future attacks, the Crown Prince said: “We are surrounded by areas of conflict, and we were the first affected by terrorism from various sources, but we are equipped to combat terror in any place and under any circumstances.”

And for that, the Saudis can thank the US which has assured its Riyadh friends it will remain a steadfast supported of the biggest exporter of terrorism in the region, far greater, and far more dangerous than Iran which Trump has branded “the number one terrorist state.”