Obama signs wrong year (2008) in the guestbook at Westminster Abbey

He went to Westminster Abbey and signed the guest book recently in the UK. He wrote the date in using 2008 as the year. Have you ever done that? He even asked someone what the date was and I assume they told him May 24th assuming he knew the year.

– Trump Blocked From Addressing UK Parliament For “Racism And Sexism”:

In a striking announcement by John Bercow, the speaker of the British House of Commons, Donald Trump is to be barred from giving a historic address in Westminster Hall, the British Parliament’s grandest and most prestigious hall.

Bercow announced he would not give the US President permission to speak in the 11th Century Westminster Hall when he makes a state visit. John Bercow slammed Trump for “racism and sexism”, his undermining of judges and his migrant ban. Bercow’s intervention is unusual because Speakers are expected to remain above Parliament’s partisan fray.

He was cheered by lawmakers when he said that, although Britain values its relationship with the U.S., “our opposition to racism and to sexism, and our support for equality before the law and an independent judiciary, are hugely important considerations.” Trump is due to visit Britain later this year.

As The Mirror reported, Bercow added that although he does not have as much say over a speech in the glittering Royal Gallery in the House of Lords, “I would not wish to issue an invitation”.

Labour leader Jeremy Corbyn tweeted: “Well said John Bercow. We must stand up for our country’s values. Trump’s State Visit should not go ahead.”

It comes after 163 MPs signed an internal petition demanding Trump be refused the honour due to his migrant ban and comments on torture and women.

Westminster Hall is where ex-President Barack Obama addressed both houses of Parliament in 2011 and is a venue previously used by Nelson Mandela. 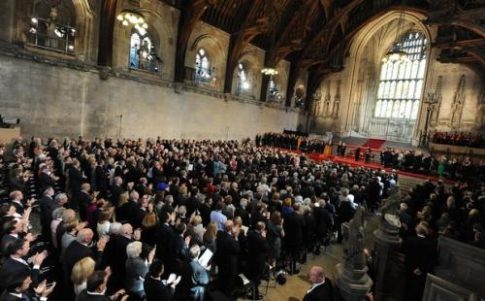 Speaker Bercow said he is one of three “keyholders” that would agree to any address in the historic hall. The other two are the Lord Speaker and Lord Great Chamberlain. He told MPs a Westminster Hall address “is not an automatic right – it is an earned honour.”

The Speaker added: “We value our relationship with the United States. If a state visit takes place, that is way beyond and above the pay grade of the Speaker.

“However, as far as this place is concerned I feel very strongly that our opposition to racism and to sexism and our support for equality before the law and an independent judiciary are hugely important considerations in the House of Commons.”

Bercow also outlined his opposition to Mr Trump being invited to address MPs and peers in the Royal Gallery, a room often used for state receptions.

He said: “So far as the Royal Gallery is concerned, and again I operate on advice, I do not perhaps have as strong a say in that matter. It is in a different part of the building although customarily an invitation to a visiting leader to deliver an address there would be issued in the names of the two speakers. I would not wish to issue an invitation to President Trump to speak in the Royal Gallery.”

As usual, we look forward to Trump’s angry tweet once he learns that he is effectively non-grata in the British Parliament.