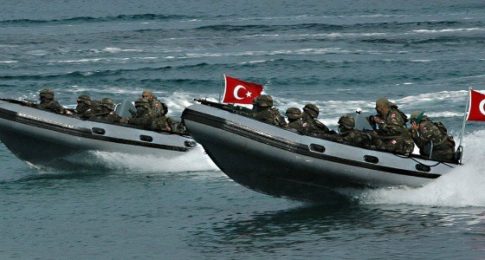 Tensions are again on the rise in the Aegean Sea, where Greece is increasingly confronted by belligerent language from Turkey asserting its claim over some little rocks sticking out of the Mediterranean. A Member of Parliament of the ruling Justice and Development Party (AKP) yesterday even threatened with violence in retaliation for “games” allegedly played by Athens.

“I am warning Greece: You were saved owing to a cowardly [Turkish] admiral in 1996. Do not play the Kardak game with us. We will shoot you!,” tweeted Hüseyin Kocabıyık, the AKP deputy from the city of Izmir. Some 21 years ago the two countries almost went to war over the islets, located some seven kilometres from the Turkish peninsula of Bodrum. They are called Imia in Greek and Kardak in Turkish.

According to Kocabıyık, the chief of the Turkish navy had in 1996 contravened orders from the then-Prime Minister Tansu Çiller to destroy ships flying the Greek flag, daily Hürriyet reports. “The Greek impertinence in the Aegean is continuing because the political order was not followed on that day. However, the Greeks should know that Turkey is not the country as it was in 1996,” the politician added to his hostile remarks on Twitter.

Just 3 days ago, a trip by the Turkish Chief of Staff General Hulusi Akar and other high-ranking military officers by boat to the contested region led to a brief face-off, The Guardian reports. According to Athens, a Turkish navy missile boat, “along with two special forces rafts,” penetrated the Greek territorial sea close to the Imia islets. The Turks cleared the area several minutes after being “shadowed” by Greek naval patrols, the Greek defence ministry stated. In addition, Greece claims Turkey has violated Greek airspace 138 times in one day.

In Turkish media, conflicting reports on the incident emerged.

Private Dogan news agency mentioned “tense moments” for half an hour before the Turks backed down after their ships were “blocked by Greece.” The Turkish army, later on, denied this version of events, claiming there had never been a blockade. Akar visited the region in order to “review and inspect” Turkish boats, Ankara stated.

The Turkish drumbeats of war, seemingly in order to intimidate Athens, may have two causes, analysts say.

For one, despite Turkish requests, the Greek high court recently refused to extradite a group of Turkish soldiers who fled Turkey after the failed coup of July, angering Ankara.

After the putsch attempt, the Islamist regime of president Recep Erdogan has been exploiting the victory over his enemies in the army to gain power, by transforming Turkey’s constitution from a parliamentary system into a presidential regime.

War propaganda on some insignificant islets can perhaps be helpful in shielding voters from the political reality, which is that Turkey is rapidly turning into an autocratic caliphate inspired country, drifting from Europe towards the Middle East.

And there is a seer who has foreseen (the migrant crisis) and war between Turkey and Greece, just before Turkey is getting destroyed by Russia.