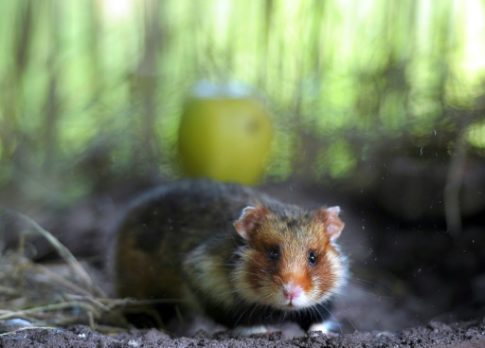 The major consumption of corn leads to infanticide among the Great hamster, a rodent threatened in Alsace, according to a recent study highlighting “problems related to monoculture”

A diet of corn is turning wild hamsters in northeastern France into deranged cannibals that devour their offspring, alarmed researchers have reported.

“There’s clearly an imbalance,” Gerard Baumgart, President of the Research Centre for Environmental Protection in Alsace, and an expert on the European hamster, told AFP on Friday.

“Our hamster habitat is collapsing.”

The findings, reported last week in the journal Proceedings of the Royal Society of London B, finger industrial-scale monoculture as the culprit.

Once nourished by a variety of grains, roots and insects, the burrowing rodents live today in a semi-sterile and unbroken ocean of industrially grown maize, or corn.

The monotonous diet is leaving the animals starving, scientists discovered almost by accident.

The problem is a lack of vitamins. In fact, one in particular: B3, or niacin.

Researchers led by Mathilde Tissier at the University of Strasbourg had set out to determine whether hamster diet affects their ability to reproduce in the wild.

Earlier work had looked at the impact of pesticides and mechanised ploughing, which can destroy their underground homes, especially during hibernation in winter.

But the possible link with what they eat remained unexplored.

A first set of lab experiments with wild specimens compared wheat and corn-based diets, with side dishes of clover or worms.

There was virtually no difference in the number of pups born, or the basic nutritional value of the different menus.

But when it came to survival rates, the difference was dramatic.

About four-fifths of the pups born of mothers feasting on wheat-and-clover or wheat-and-worms were weaned.

Only five percent, however, of the baby hamsters whose mothers ate corn instead of wheat made it that far.

What was most disturbing is how they perished.

“Females stored their pups with their hoards of maize before eating them,” the scientists reported. “Pups were still alive at that time.”

The cannibal mothers showed other signs of abnormality.

The usually cute-and-cuddly hamsters ran in circles, “climbing and pounding their feeders,” when scientists entered the room.

The females also had swollen and dark tongues, and blood so thick it was difficult to draw for samples.

The researchers recognised the symptoms, and had a hunch as to what was causing them.

Vitamin B3 deficiency has been linked to ‘black-tongue’ syndrome in dogs, and a condition in humans called pellagra, also known as the “3-D” disease: diarrhoea, dementia and dermatitis, such as eczema.

“Improperly cooked maize-based diets have been associated with higher rates of homicide, suicide and cannibalism in humans,” the researchers note.

Pellagra is thought to have decimated some three million people in North America and Europe from the mid-18th to the mid-20th century.

Tissier and her colleagues thought of a simple way to find out if their corn-crazed hamsters were suffering from a similar condition.

In a second set of experiments, they offered hamsters corn-based diets, one of them with B3 added.

Sure enough, the vitamin-enriched diet was enough to eliminate the horrific symptoms, and prevent the female hamsters from eating their young.

The dire consequences of the B3-deficient corn diet, the scientists concluded, stemmed not from reduced maternal hormones, but rather a change in the nervous system that induced the same “dementia-like” behaviour diagnosed in humans.

“Knowing that these species already face many threats, and that most of them are in danger of extinction, it is urgent to restore a diverse range of plants in agriculture schemes,” the researchers urged.

Baumgart, who has been fighting for years to protect the endangered rodents, agrees.

“Monoculture in agriculture is really bad for biodiversity,” he said.

Explore further:Study shows a way to tell if your hamster is happy

More information: Mathilde L. Tissier et al. Diets derived from maize monoculture cause maternal infanticides in the endangered European hamster due to a vitamin B3 deficiency, Proceedings of the Royal Society B: Biological Sciences (2017). DOI: 10.1098/rspb.2016.2168