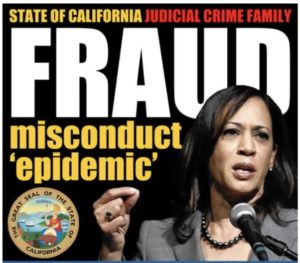 – Steven Mnuchin Donated To One Democrat In 2016 – The Woman Who Declined To Prosecute His Bank:

Wednesday’s post, Donald Trump Has an Enormous and Very Dangerous Wall Street Blind Spot, highlighted the fact that the bank run by Trump’s Treasury Secretary nominee, Steven Mnuchin, was given a pass by California attorney general Kamala Harris, despite the discovery of over a thousand legal violations. Kamala Harris has since been (s)elected to the U.S. Senate.

Let’s recap some of what we learned:

In the memo, the leaders of the state attorney general’s Consumer Law Section said they had “uncovered evidence suggestive of widespread misconduct” in a yearlong investigation. In a detailed 22-page request, they identified over a thousand legal violations in the small subsection of OneWest loans they were able to examine, and they recommended that Attorney General Kamala Harris file a civil enforcement action against the Pasadena-based bank. They even wrote up a sample legal complaint, seeking injunctive relief and millions of dollars in penalties.

But Harris’s office, without any explanation, declined to prosecute the case.

Sen. Ron Wyden, the top Democrat on the Senate Finance Committee, warned: “Given Mr. Mnuchin’s history of profiting off the victims of predatory lending, I look forward to asking him how his Treasury Department would work for Americans who are still waiting for the economic recovery to show up in their communities.”

The consistent violations of California foreclosure processes outlined in the memo would indicate that Mnuchin’s bank didn’t merely act callously, but did so with blatant disregard for the law.

According to the memo, OneWest also obstructed the investigation by ordering third parties to refuse to comply with state subpoenas.

The memo also raises questions about then-California Attorney General Kamala Harris, who was sworn in as a U.S. senator on Tuesday, and who will soon have to vote on Mnuchin’s appointment.

Why did her office close the case, deciding not to “conduct a full investigation of a national bank’s misconduct and provide a public accounting of what happened,” as her own investigators had urged?

In the days since this story broke, there’s been a lot of well deserved scrutiny pointed in the direction of Ms. Harris, yet she’s failed to provide a satisfactory answer as to why her office failed to prosecute. Which got me thinking about another paragraph from the above article:

Harris’s prodigious fundraising also raises questions about how attentive she is to the needs of campaign contributors. Prior to signing on with Trump, Mnuchin donated to members of both parties. He gave $2,000 to Harris’ Senate campaign in February 2016. Among the investors in OneWest Bank was major Democratic donor George Soros, who maxed out to Harris’ campaign in 2015.

Did he really “donate to members of both parties.” Technically, yes, but it appears Kamala Harris was the only Democrat he donated to in 2016. Which raises all sorts of obvious questions. As the Sacramento Bee noted last month in its article, Kamala Harris Won Over Many Californians, Steve Mnuchin Included:

Well isn’t that interesting. Mnuchin gives one donation to a Democrat, and it just so happens to be the woman who inexplicably protected his bank from prosecution. Click here to see his 2016 donations.

While $2,000 is a small amount of money, the entire thing stinks. Kamala Harris should resign from her Senate seat immediately unless she can provide a reasonable explanation of why she let OneWest off the hook. Likewise, Steven Mnuchin should be replaced by Trump as Treasury Secretary nominee. Both are swamp creatures, and we should demand better than these two.