– John Harwood Asks “Who Do You Believe America?” – Gets Surprising Answer:

“Who do you believe America? Wikileaks, or US Intel Officials?”

The response, which emerged from his immediate following which one would surmise, should gravitate toward Harwood’s liberal ideology and thus respond in a way Harwood expected, was yet another slap in the face for the establishment’s perspective on how the world should really run. 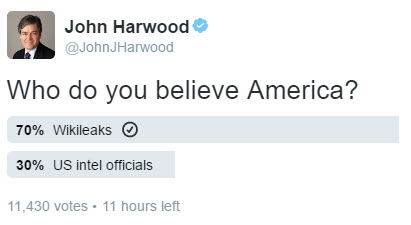 Who do you believe America?

And that Mr. Harwood is why Donald Trump is about to become President! When will you and your ilk wake up to this?

As Trump tweeted earlier in the week: “It is for the American people to make up their minds as to the truth.”

This merely confirms Lou Dobbs’ survey from earlier in the week.

#LDTPoll: Who do you believe on the Russian hacking allegations?