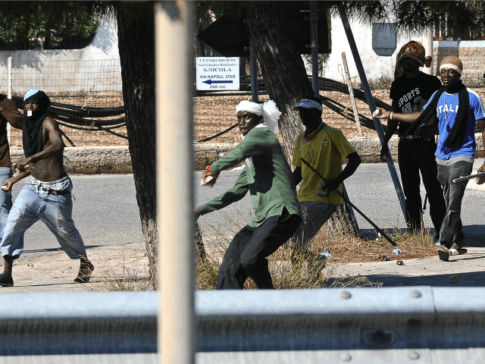 A riot erupted in a reception centre in Venice following the death of an African migrant. Migrants lit fires and staff were unable to escape for hours.

The riot began after the body of a 25-year-old female migrant from the Ivory Coast was found in the shower of the camp. Migrants began smashing objects and started fires after they had cut off power in the reception centre, reports Swiss paper Blick.

Fearing violence, the 25 employees barricaded themselves in their offices. The riots lasted for hours, and employees were only able to get out of the centre at around midnight once police had managed to neutralise the situation.

The cause of the death of the migrant woman from the Ivory Coast is unknown and police are currently investigating. Migrants, who had complained about the conditions at the reception centre prior, claimed the woman was ill and employees took too long to get her medical attention.

Reception centre workers have countered their claims and the public prosecutor in Venice has ordered an autopsy be carried out to determine cause of death.

1,400 asylum seekers live in the reception centre which was converted from an old military barracks in the town of Cona on the southern outskirts of Venice.

2016 saw the largest wave of migrants crossing the Mediterranean from North Africa to Italy in recent history. Many of the migrants come from West Africa and North African countries and have been unable to continue on to Northern and Western Europe due to border restrictions.

Tensions along the Northern Italian border in migrant camps has led to several riots in places like Turin and along the Austrian border.

National police chief Franco Gabrielli has said there will be a “zero tolerance” policy on illegal migration in 2017 and directed law enforcement officials to “establish immediate contact with immigration officials to expedite deportation procedures.”