During a brief, informal exchange with reporters on New Year’s Eve at his Mar-a-Lago estate in Palm Beach, Donald Trump questioned the official version of the “Russians hacking the election”, saying it was possible “somebody else” compromised the Democratic campaign’s servers, adding that he will reveal some previously undisclosed facts in the coming days by hinting that “I also know things that other people don’t know, we they cannot be sure of the situation.”

Asked what that information included, the Republican President-elect said, “You will find out on Tuesday or Wednesday.” He did not elaborate.

Trump also reiterated his belief that others might be responsible for the cyberattacks: “I know a lot about hacking. And hacking is a very hard thing to prove. So it could be somebody else. And I also know things that other people don’t know, and so they cannot be sure of the situation.”

“I think it’s unfair if we don’t know. It could be somebody else,” Reuters cited Trump as telling the media.

He also added that computers are a risky form of communication. “It’s very important, if you have something really important, write it out and have it delivered by courier, the old fashioned way because I’ll tell you what, no computer is safe,” Mr. Trump added. “I don’t care what they say, no computer is safe. I have a boy who’s 10 years old, he can do anything with a computer. You want something to really go without detection, write it out and have it sent by courier.” 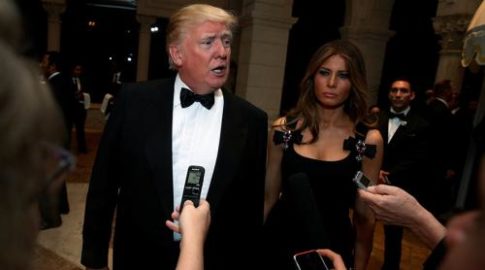 Trump was responding to questions about his position on the alleged Moscow-backed “hacking” of the Democratic National Committee that resulted in the emergence of leaks unfavorable to Hillary Clinton. While he has consistently shrugged off the accusations, which also claimed he was backed by Russia against Clinton, Trump on Thursday reacted to the new sanctions against Russia and the release of a report by the FBI and the DHS with a promise to attend intelligence briefings to be updated on the matter. Russia at first vowed to retaliate, but on Friday, President Vladimir Putin said his government wouldn’t expel U.S. diplomats in reprisal. That, in turn, prompted Trump to post on his Twitter account: “Great move on delay (by V. Putin). I always knew he was very smart!”

The President-elect said he wanted to press U.S. intelligence agencies to make sure they are correct in asserting that Russia was behind a cyberattack aimed at disrupting the 2016 presidential race, asserting that the US intelligence community has been wrong before. He made reference to a government assessment before the U.S. invasion of Iraq in 2003 that the country’s former leader, Saddam Hussein, possessed weapons of mass destruction.

“And if you look at the weapons of mass destruction, that was a disaster and they were wrong,” Mr. Trump said, according to the press pool report. “And so I want them to be sure. I think it’s unfair if they don’t know.”

As we reported last week, the latest joint report by the FBI and the DHS did not reveal any actual evidence of the Russian government being behind the alleged hacks, merely noting code that is present in countless forms of malware, some of which originate in the Ukraine, and also came with a disclaimer, saying the DHS “does not provide any warranties of any kind regarding any information contained within.”

On a separate matter, Trump was also asked about the possibility of meeting with Taiwan’s president if she visits the US after his January 20 inauguration.

“We’ll see,” Trump said about meeting Tsai Ing-wen, without elaborating, leading the US media to conclude he was leaving a door open to such a possibility. Taiwan’s president will be in transit in Houston on Jan. 7 and again will be in transit in San Francisco on Jan. 13. Trump, citing protocol, said he would not meet with any foreign leaders while President Barack Obama is still in office.

Trump’s openness to meet with Ing-wen will likely lead to further tensions with China. Overnight, China’s president Xi Jinping said in his New Year’s address that China will never allow anyone to “make a great fuss” about its territorial sovereignty and maritime rights.

“We adhere to peaceful development, and resolutely safeguard our territorial sovereignty and maritime rights and interests,” Xi said, in comments carried by state media late on Saturday. “Chinese people will never allow anyone to get away with making a great fuss about it,” he said, without elaborating.

Trump was also asked about Obama’s plan to visit Capitol Hill next week and talk to Democrats about preserving his signature domestic initiative, the Affordable Care Act. Congressional Republicans are planning to repeal the legislation. Cited by the WSJ, Trump said that health-care-premium increases underscore that the system created under the Obama administration “doesn’t work.”

He cited former President Bill Clinton’s comment at a campaign stop in October that premium increases were creating hardships for millions of hardworking families, even as uninsured people were getting coverage, calling Obamacare the “craziest thing in the world.”

Trump said: “Bill Clinton said it; maybe he shouldn’t have said it on the campaign when he said it. It’s unaffordable, it doesn’t work and it’s been crazy.”

Trump tried to end the year on a positive note despite questions about the future of U.S.-Russia relations because of escalating tensions between Obama and Russian President Vladimir Putin, as well as Trump’s promise to crack down on China’s trade practices, which he says unfairly target American workers.

But he criticized U.S. Secretary of State John Kerry for earlier this week offering a stark assessment of Israel’s policies in the Middle East, which he said could threaten the possibility of establishing a Palestinian state co-existing with Israel. Trump called Kerry’s speech “very unfair.”

As he wrapped up the four-minute chat with reporters, Trump also was asked what his 2017 new year’s resolution was.