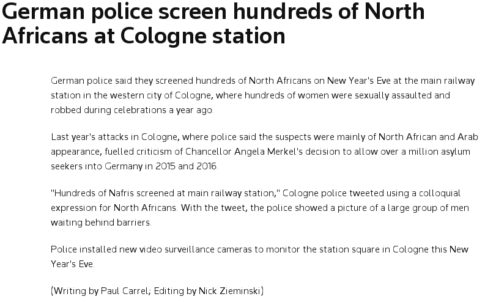 German police said they screened hundreds of North Africans on New Year’s Eve at the main railway station in the western city of Cologne, where hundreds of women were sexually assaulted and robbed during celebrations a year ago.

Last year’s attacks in Cologne, where police said the suspects were mainly of North African and Arab appearance, fuelled criticism of Chancellor Angela Merkel’s decision to allow over a million asylum seekers into Germany in 2015 and 2016.

“Hundreds of Nafris screened at main railway station,” Cologne police tweeted using a colloquial expression for North Africans. With the tweet, the police showed a picture of a large group of men waiting behind barriers.