– Ten Archaeological Enigmas from Across the Globe:

One of the best things about archaeology is uncovering places, artifacts, and human remains that answer long-held mysteries about our past and our origins. But frequently discoveries are made that do not solve ancient puzzles, but simply raise more questions to be answered. Here we feature ten such discoveries – from indecipherable manuscripts to Frankenstein mummies, and incredible artifacts from unknown civilizations. Some of these mysteries will one day be solved as science and research techniques progress, others will keep their secrets hidden forever.

The Unknown Origins of the Longyou Caves 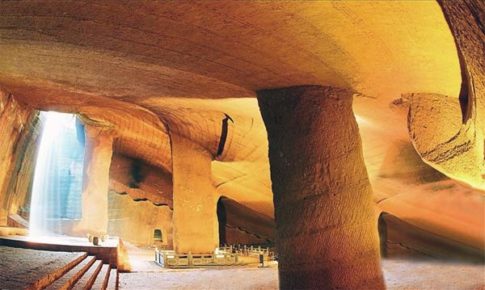 Located near the village of Shiyan Beicun in Zhejiang province, China, lies the Longyou caves – an extensive, magnificent and rare ancient underground world considered in China as ‘the ninth wonder of the ancient world’.  The Longyou grottoes, which are thought to date back at least 2,000 years, represent one of the largest underground excavations of ancient times and are an enduring mystery that have perplexed experts from every discipline that has examined them.  Scientists from around the world in the fields of archaeology, architecture, engineering, and geology have absolutely no idea how they were built, by whom, and why. First discovered in 1992 by a local villager, 36 grottoes have now been discovered covering a massive 30,000 square metres. Carved into solid siltstone, each grotto descends around 30 metres underground and contains stone rooms, bridges, gutters and pools. There are pillars evenly distributed throughout the caves which are supporting the ceiling, and the walls, ceiling and stone columns are uniformly decorated with chisel marks in a series of parallel lines. To date, scientists have not been able to establish who built them, how they were constructed, and why.