– Schwarzman, Dimon, Fink Will Advise Trump How To Create Jobs:

Members of the Forum will be charged with providing their individual views to the President – informed by their unique vantage points in the private sector – on how government policy impacts economic growth, job creation, and productivity. The Forum is designed to provide direct input to the President from many of the best and brightest in the business world in a frank, non-bureaucratic, and non-partisan manner.

This is the same Schwarzman who during the Republican primaries in October 2015, characterized Trump as “the P.T. Barnum of America.”

“This forum brings together CEOs and business leaders who know what it takes to create jobs and drive economic growth,” Trump said in a statement issued by Blackstone. “My administration is committed to drawing on private sector expertise and cutting the government red tape that is holding back our businesses from hiring, innovating, and expanding right here in America.”

Sadly, it was the private sector’s policies, expertise and “advice” to the Obama administration, that led to this particular outcome: 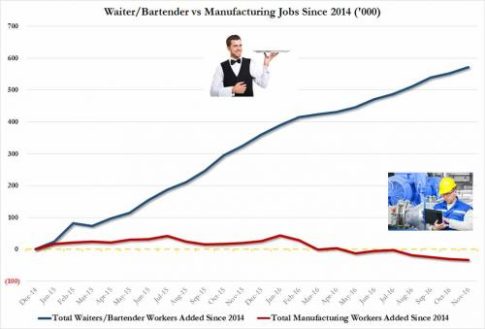 It also led to record stock buybacks and all time high stock prices, not to mention record CEO compensation, but surely Trump will see right any such attempts to pass “advice” meant to help the people whose only intention is to make a handful of Wall Street oligarchs even richer… right.

Schwarzman, the 69-year-old private equity executive who will chair the forum, said at the Wall Street Journal CEO Council after the election that he is “excited” about the prospects for economic growth in America and expects the business horizon to look “infinitely better” in the next few years.

In an interview with Bloomberg before the election, Schwarzman said he was undecided between Trump and Clinton. He said the GOP nominee’s plans for economic growth sound “wonderful if you could do that,” but also expressed concerns about his immigration plans.

“If you were really removing a large number of people, that’s got to adversely affect the economy,” he said.

Other panel members are also prominent Clinton fans: Disney’s Iger, 65, supported Hillary Clinton during the campaign and co-hosted a fundraiser for her over the summer. However, he too quickly changed his tune in the days following Trump’s election, when he said he was “hopeful” about what’s to come in an interview with CNBC.

Jim McNerney, former chairman and CEO of Boeing, who is also on the committee, once referred to Trump’s rhetoric on trade as “dangerous.”

The full list of panel members include the following:

For some inexplicable reason, Warren Buffett failed to make the list, if only for the time being.