Update: courtesy of NBC’s Tom Winter, we have the alleged Somali refugee suspect’s name, which is Abdul Razak Ali Artan.

According to recent press report, Abdul Razak Artan was a peaceful Muslim, “wrongly portrayed by the media” 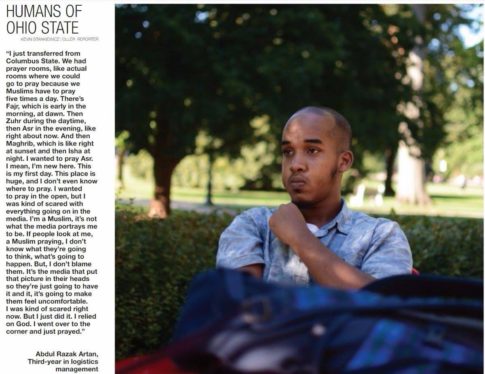 Following today’s attack at Ohio State University, CBS is reporting that the sole suspect is an OSU student who was a Somali refugee. His name has not been released.

UPDATE: A 20-year-old Somali man is the suspect in the Ohio State University attack https://t.co/G7ANHT8lbnpic.twitter.com/kdOzF7aWiV

There were conflicting report about the suspect’s age with NBC adding that according to law enforcement officials, he was an 18-year-old Ohio State student, although it agrees that the unnamed suspect was a Somali refugee who was a legal permanent resident of the United States.

Conflict News adds that a terror motive is currently being investigated by authorities.

BREAKING: Ohio attacker reportedly a Somali refugee and a student at OSU. Terror motive being investigated by authorities – @AmichaiStein1

During a news conference following the attack, the chief of police at the university Craig Stone said that the suspect was shot dead after ramming into pedestrians with a car and attacking them with a butcher knife. While the incident was initially reported as an “active shooter” situation, the suspect did not shoot anyone.

“About 9:52 am, a male suspect drove a vehicle over the curb… struck pedestrians. He exited the vehicle, and used a butcher knife to start cutting pedestrians,” Craig Stone said as quoted by AFP.

“This car just swerved and ran into a whole group of people,” said Nicole Kreinbrink, who was walking down the street when she saw the car hit people who had evacuated an academic building during a fire alarm. “All these people were running and screaming and yelling,” she added.

“This was done on purpose,” Stone said.

Finally, Columbus Police Chief Chief Kim Jacobs, whose officers also responded to the attack, said it could have been an act of terror. “That’s why our federal partners are here and helping,” she said.

Jacob Bowers, an OSU sophomore, was sitting on a bench about 100 feet away when he noticed people running. “Then I heard someone yell, ‘He’s got a knife.’ And I saw a guy with a big-ass knife just chasing people around. When I saw that, I grabbed all my stuff and started running,” Bowers said.

Bowers said he looked back to see a police officer on the scene. The officer yelled to the suspect, “Drop it a and get down or I’ll shoot,” and then fired on the suspect, Bowers said.

“The man was going insane,” he said.

Another student told NBC News he heard gunfire from his dorm room.

“I heard gunshots from my dorm, probably six or seven,” said Stephen Yunker, 18, a freshman who lives two blocks from Watts Hall, where the incident occurred.

He said he and his roommate looked at each other, heard sirens about five seconds later, and then looked out the window.

“We saw fire trucks, couple of cars, and a body laying on the ground,” he said.

As SiteIntel’s Rita Katz tweeted earlier in the day, “though no confirmed motive, use of vehicle & knife in OhioState attack is consistent with recent attack instructions issued by ISIS”

1) Though no confirmed motive, use of vehicle & knife in #OhioState attack is consistent with recent attack instructions issued by #ISISpic.twitter.com/8OudeN7EIr

She adds that a November 26 ISIS video instructed on knife attacks while ISIS’ Rumiyah mag advised on vehicular attacks 2 weeks prior. Both spread on soc media

3) As of yet, no significant response from pro-#ISIS community online on #OhioState attack

However, as of yet she notes, there has been no response from pro-ISIS community online on the OhioState attack.