Following the inauguration of Golden Dawn offices in Xanthi overnight, an anti-fascist rally marched through the streets of the North-Eastern Greek town to protest the right-wing extremists. However, once the rally was over the situation rapidly got out of control as a 300-strong group wearing gas masks and helmets broke police cordons and police and rioters exchanged tear gas and molotov cocktails.

The situation got out of control and they started to hurl molotov cocktail bombs at the policemen. They answered with teargas.

The group moved through the streets of center of the town hurling fire bombs. 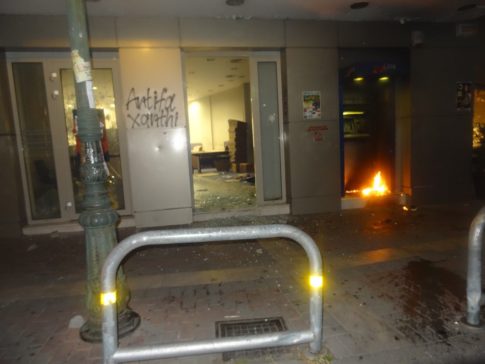 They set garbage bins and chairs and tables of cafes on fire. 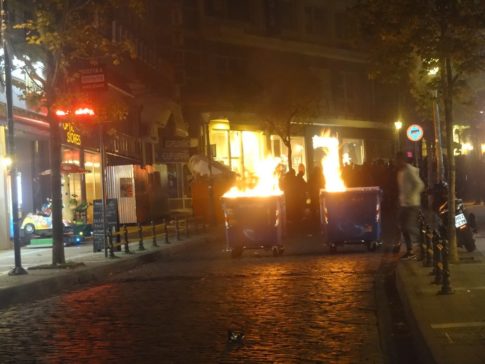 They clashed with riot police.

According to local media, the group members are from Xanthi, Thessaloniki and surrounding areas who plan protest actions all through the weekend due to the presence of 5 GD MPs at the office inauguration. 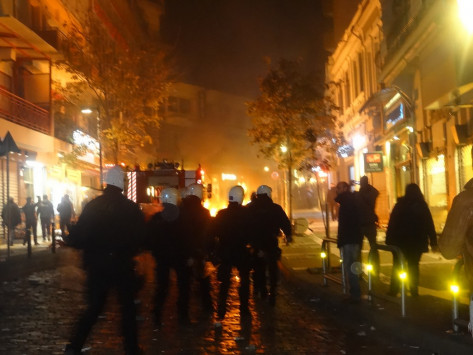 According to local media xanthi2.gr, there were hardly any locals present the GD inauguration but some 1000 people protesting. Unions, political parties, student organizations and other groups had appealed to people to refrain from attending the inauguration.

A reporter of Xanthi2 was reportedly threatened by GD members who also attempted to shoot a picture of him. The reporter was rescued by several riot policemen who were watching the incident and rushed to his aid when things got serious.