– “It’s As If The Whole City Fell Down” – Towns Collapse After Strongest Quake In 35 Years Hits Italy:

On Wednesday, when we reported on the latest set of powerful, shallow quakes to strike central Italy, which themselves were aftershocks of the deadly August 24 earthquake which killed 300 people and injured many more, we quoted Salvatore Mazza, the National Institute of Geophysics and Volcanology who said that “The earthquake today has further disrupted the tectonic plates, and in the coming hours we may see aftershocks of today’s earthquake on top of those from August 24”, and concluded that it is likely that more quakes are coming.

We didn’t have long to wait, and overnight central Italy was hit by another powerful earthquake Sunday, toppling buildings that had recently withstood other major quakes and sending panicked residents back into the streets, but luckily causing no immediate loss of life. That there were no reports of deaths was largely due to the fact that thousands of residents left their homes after two strong jolts last week shook the same mountainous area.

As AP reports, the quake with a preliminary magnitude of 6.6 was the strongest to strike the country in nearly 36 years.

Some 20 people were injured, many lightly, authorities said.

The Apennine Mountain region of central Italy, located along a major fault line, has been the site of dozens of significant earthquakes, including an Aug. 24 quake with a 6.1 magnitude that killed nearly 300 people.  Back-to-back jolts on Wednesday left thousands more people homeless, but the only death reported resulted from a heart attack.

Closest to the epicenter was the ancient city of Norcia, the birthplace of St. Benedict, the father of monasticism and famed for its Benedictine monastery. Witnesses said the 14th Century St. Benedict cathedral collapsed in the quake, with only the facade still standing. 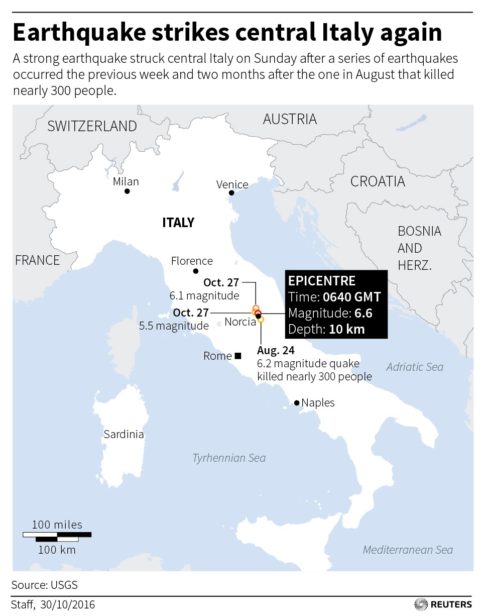 “It is since 1980 that we have had to deal with an earthquake of this magnitude,” Fabrizio Curcio, the head of Italy’s Civil Protection agency, said. Curcio was referring to a 6.9 magnitude quake in a different region that includes Naples that killed some 3,000 people and caused extensive damage in November 1980.

Residents already rattled by a constant trembling of the earth rushed into piazzas and streets after being roused from bed by Sunday’s 7:40 a.m. quake. It was felt as far north as Salzburg, Austria and all the way down the Italian peninsula to the Puglia region, the heel of the boot.

Curcio said authorities were responding with helicopters to help the injured and monitor collapses, as many roads were blocked by landslides. Some 3,600 people had already been relocated, many to the coast, following last week’s quake, and Curcio said more would follow.

Television images showed nuns rushing into the main piazza of Norcia as the bell tower appeared on the verge of collapse. Later, nuns and priests knelt in prayer in the main piazza, and a firefighter appealed to a priest to help keep residents calm in an effort to prevent them from looking for loved ones.

Cited by AP, the town’s deputy mayor, Pierluigi Altavilla, said his house remained standing, but everything inside had been toppled. “It seemed like a bomb exploded inside the house,” he told Sky TG24.The quake comes during a long holiday weekend in Italy going into Tuesday’s All Saint’s Day, when Catholics honor the dead. The head of the church in Umbria, Cardinal Gualtiero Bassetti, urged priests not to hold Masses during the period inside churches, for fear of further collapses, but in open spaces, ANSA reported.

Adding drama to the event, mayors in some towns, including Castelsantangelo sul Nera, said coffins had been pushed out of their resting place inside the walls of cemeteries, which in Italy are typically walled structures into which coffins are laid.

The quake struck a cluster of mountain towns, many of historic significance, already reeling from last week’s pair of aftershocks to last August’s deadly quake, including Norcia, Visso, Castelsantangelo sul Nero and Preci.

Some towns and smaller settlements were left isolated by landslides that blocked the roads, and the civil protection authority was responding with helicopters to help the injured, while also monitoring damage. A civil protection official in the Marche region, Cesare Spuri, said they were trying to determine if people were trapped under downed debris. New collapses also were reported throughout the region, including in Tolentino, where the news agency ANSA said three people were extracted from the rubble.

The hilltop town of Camerino, some 60 kilometers from Ancona, suffered new building collapses but no reports of injuries. City spokesman Emmanuele Pironi said the main fire hall had been rendered uninhabitable and that they had transferred to a warehouse. “An hour and a half after the quake, we can be reassured,” Pironi told The Associated Press.

The mayor of quake-hit Ussita said a huge cloud of smoke erupted from the crumbled buildings. “It’s a disaster, a disaster!” Mayor Marco Rinaldi told ANSA. “I was sleeping in the car and I saw hell.”

The dramatic statements continued: in Arquata del Tronto, which had been devastated by the Aug. 24 earthquake that killed nearly 300 people, Arquata Mayor Aleandro Petrucci said, “There are no towns left.”

“Everything came down,” he said.

The quake sent boulders raining onto state highways and smaller roads, forcing closures throughout the quake zone that was impeding access to hard-hit cities such as Norcia. Traffic was being diverted to other roads. The Salaria highway, one of the main highways in the region, was closed at certain points as it was after Wednesday’s quakes.

In addition, Italy’s rail line said some local lines in Umbria and Le Marche were closed as a precaution. The quake forced the temporary closure of some of Rome’s most important tourist sites, including the presidential palace, so authorities could check for damage.

The St. Paul Outside the Walls basilica was closed for several hours after some plaster fell, but was later reopened. Vatican firefighters conducted checks at St. Peter’s Basilica and the Vatican’s other basilicas but found no damage.

The crowds in St. Peter’s Square interrupted Pope Francis with applause when he mentioned the quake during his weekly Sunday blessing.

“I’m praying for the injured and the families who have suffered the most damage, as well as for rescue and first aid workers,” he said.

The European-Mediterranean Seismological Center put the magnitude of Sunday’s earthquake at 6.6 or 6.5 with an epicenter 132 kilometers northeast of Rome and 67 kilometers east of Perugia, near the epicenter of last week’s temblors. The U.S. Geological Survey put the magnitude at 6.6. To date, Italy’s deadliest quake in recent history remains the 1908 Messina quake that destroyed the Sicilian city and killed tens of thousands of people.

The worst news for central Italian residents is that the worst is likely not over yet: aftershocks with magnitudes of up to 4.5 still reportedly rock the region.

Italy’s National Commission for the Forecast and Prevention of Major Risks (CGR) cautioned Friday that more powerful earthquakes could hit the region in the nearest future, identifying at least three areas at risk for further seismic activity.

“There is no current evidence that the (seismic) sequence underway is coming to an end,” the commission warned.