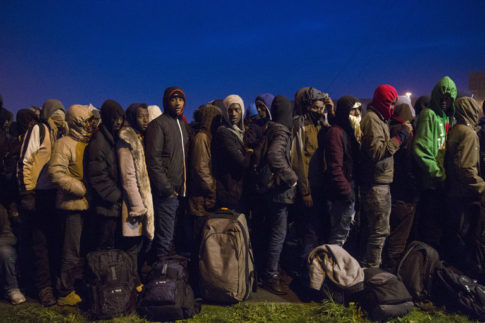 CALAIS, France — The French government began its long-awaited clearing of the sprawling migrant camp outside the city of Calais on Monday morning, the start of its effort to once and for all dismantle an eyesore that has become an emblem of the country’s — and Europe’s — struggle to get a handle on the migration crisis.

Lines of migrants stretched for a mile in the cold along the routes leading out of the “Jungle,” as the camp is known, to be processed in a giant hangar. Buses waited along a side road to take them to dozens of reception centers scattered throughout France. Each migrant will have to choose between two regions, except for the island of Corsica and the Île-de-France region, which includes Paris.

Sixty buses, each carrying 50 migrants, were scheduled to depart the camp today; 45 tomorrow; and 40 on Wednesday. On Tuesday, the demolition of the camp is scheduled to begin. About 1,250 French police officers were assembled at the camp. The authorities are concerned about the possibility of clashes with militant activists, though not with migrants.