Submitted by Joseph Jankowski of Planet Free Will

Yesterday, WikiLeaks put out a serious of tweets informing the public that Julian Assange had been attacked in a smear campaign pushed by a “front” group and U.S. democratic media.

The DailyKos put out a report on Oct. 17 that WikiLeaks describes as a “smear campaign plot to falsely accuse Julian Assange of pedophilia.”

“An unknown entity posing as an internet dating agency prepared an elaborate plot to falsely claim that Julian Assange received US$1M from the Russian government and a second plot to frame him sexually molesting an eight year old girl,” WikiLeaks said in a press release Tuesday.

The press release went on: “The second plot includes the filing of a fabricated criminal complaint in the Bahamas, a court complaint in the UK and laundering part of the attack through the United Nations. The plot happened durring WikiLeaks’ Hillary Clinton related publications, but the plot may have its first genesis in Mr. Assange’s 16 months litigation against the UK in the UN system, which concluded February 5 (Assange won. UK and Sweden lost & US State Dept tried to pressure the WGAD according to its former Chair, Prof. Mads Andenas).”

The DailyKos reported that a Canadian family holidaying in the Bahamas reported to the police that their 8-year-old daughter was “sexually molested online” by Assange on Toddandclare.com.

Julian Assange’s legal team provided a timeline in the press release which showed that the self-claimed dating agency ToddAndClare.com contacted WikiLeaks’ defense team offering one million dollars for Assange to appear in a video advertisement for the “dating agency”.

Assange’s defense wrote back, stating that the proposal appeared to be an “elaborate scam designed to entrap Mr. Assange’s reputation into unwanted and unwarranted publicity.”

WikiLeaks was able to trace down the address of the front, posting an image on twitter of what appears to be a warehouse or garage.

Here is the “headquarters” of the front (PAC?) behind the Assange “took US$1M from Russia” plot

Internet sleuths from Reddit were able to dig up some information about the dating service pushing the attacks on Assange, finding that the company shares the address with a private intelligence corporation named Premise Data Corporation.

Interestingly, Larry Summers, who is connected to the Clinton Campaign, is on the board of directors of Premise Data Corporation. 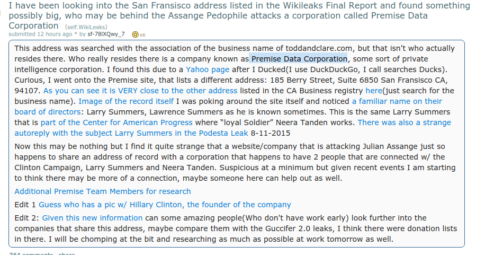 As other Redditors point out, the Center for American Progress was founded by Clinton campaign chair John Podesta and was funded by billionaire and pro-Clintonite George Soros.

Connecting the front to Clinton further, co-founder of Premise Data David Soloff has met with both Hillary Clinton and Tim Kaine this year.

With Julian Assange spearheading the Podesta leaks, which have revealed and highlighted many shady dealings of both the Clinton campaign and Clinton Foundation, it is highly unlikely that it’s a coincidence a Clinton connected group shares the same address of the smear pushing front.

As one Redditor so laughably put it, “If this was merely a coincidence, then I’m the queen of England.”

As we reported yesterday, Fox News had told its audience Tuesday morning that Assange would be arrested “maybe in a matter of hours,” leading to the speculation that there could have been a plot to arrest Assange over the pedophilia accusations.

WikiLeaks revealed yesterday that multiple U.S. sources had told them that Secretary of State John Kerry demanded that Ecuador stop Wikileaks from publishing documents damaging to Hillary Clinton’s campaign back in September, which, if true, proves that there has been previous attempt to silence Assange by the U.S. establishment.