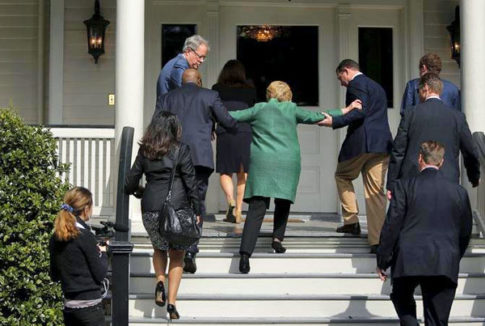 Among the latest, ninth round of Podesta email releases by Wikileaks this morning, is a July 31, 2015 email by Hillary Clinton’s National Press Secretary Brian Fallon who lays out the agenda for the day’s rollout of Clinton’s tax record and, more importantly, Hillary’s “excellent health” medical statement, where once again the media, listed as “AP, Politico, WSJ, WaPo, etc” is exposed as coordinating and colluding with the campaign to send a message that Hillary is in great health.

In the email written in the early hours on Friday, Fallon writes that in the “rollout plan” for that same day, the campaign will “Pitch the first round of stories to the travelling press corps (AP, Politico, WSJ, WaPo, etc) with a 2 pm embargo.”

He goes on to say that for these stories “we will provide the full text of HRC’s physician’s letter, summarizing that she is in excellent health and is medically fit to perform the duties of President. We will push that she is the FIRST presidential candidate to release this info.”

In further evidence of the prepared media narrative, Fallon points out that “we expect the stories that pop at 2 pm to have headlines such as “CLINTON IN ‘EXCELLENT HEALTH,’ MEDICAL RECORDS SAY” … “CLINTON RELEASES HEALTH REPORT.”

Fallon also plans how to approach the “friendly” press in an attempt to “one-up” Jeb Bush, who at the time was seen as her biggest challenger, in terms of financial disclosures, and specifically her tax filings.

In describing that the tax returns are forthcoming, we will stress that the  amount of our disclosure will better Jeb’s in three key ways:

As Fallon explains, “the lede of most of these stories will be the health records since they are being released in full, but the lower paragraphs of the stories will focus on how the campaign says it will improve upon Jeb Bush’s level of disclosure when the tax returns emerge.”

He then goes on to list the further sequence of events that will be revealed in collaboration with the press:

At 3 PM: We will provide the travelers list with the toplines of Clinton’s 2014 tax returns, emphasizing their effective tax rates (both federal and state-federal, combined). We will also provide advance text of the statement from HRC about how the wealthy – a category in which she includes herself – ought to pay their fair share, not seek to shrink or shirk their obligations.  We will provide these materials on embargo until 4 pm. We expect the headlines from this round to include: “CLINTONS PAID xx% RATE IN 2014” … “CLINTON, RELEASING RETURNS, SAYS WEALTHY SHOULD PAY MORE.”

The collaboration with the press continues as follows:

From this point on, reporters will dig into specific details in search of negative storylines, and re-write the Round 1 and Round 2 stories to reflect the additional detail. Among the storylines we expect reporters to zero in on once they dive into the full returns:

Of particular interest is Fallon’s own admission that “reporters will also scrutinize the 2013 speech list for overlap between speech hosts and campaign/Foundation donors that could fuel “pay-to-play” storylines.” To be sure, he was right, however even subsequent reporting on alleged ethical violations, as Reuters did over the weekend, has failed to provoke any branch of government to ask even one probing question of the candidate officially backed and supported by the current US president.

Fallon concludes that “despite these inevitable angles, based on the framing performed in the earlier rounds of stories, we will have given ourselves the best possible, “fighting” chance of promoting the most helpful storylines (i.e., the superlative of being the first candidate to release her health records, the Clintons’ high effective tax rate, their call for a more progressive tax code that asks wealthy individuals like themselves to pay more, the heightened transparency of HRC’s tax returns as compared to Jeb’s, etc).”

The above takes places several months after a March 2015 email exchange in which campaign manager Mook wrote Podesta, asking if he had talked to Hillary “about her taxes and health:, admitting that both topics are “hypersensitive” to her, yet adding that “both are better dealt with very early so we control them–rather than responding to calls for transparency.”

And that is how Hillary’s well-greased organization maintained the lid on her health narrative from day one, and prevented it from sliding out of control in an undesired direction by coordinating with the “friendly press.” Of course, it was unable to do so for too long, as we noted over the summer; at that point the Clinton campaign would simply smear those non-compliant press as “alt-right” elements, or as has been the case recently, invoke “Russian-support” elements and suggest it is one vast conspiracy, at least until a video of Hillary collapsing on September 11 emerged and confirmed it was all just “conspiracy fact.”