Submitted by Eric Zuesse via Stratgic-Culture.org,

As is by now well-known, the U.S. Defense Intelligence Agency’s previously classified 2012 report on the origin of the Islamic insurgency against Bashar al-Assad was released to the public on 18 May 2015, and it revealed the Obama Administration’s knowledge, at least since that time, that «the Salafist [Saudi-backed fundamentalist Sunni Islamic], the Muslim Brotherhood [Qatari-backed fundamentalist Sunni Islamic] and AQI [Al Qaeda in Iraq] are the major forces driving the insurgency in Syria», and acknowledgement that «the West, Gulf countries [Saudi Arabia and Qatar mainly], and Turkey support the opposition [to Bashar al-Assad], while Russia, China, and Iran support the regime», so that the U.S. Government is, in fact, allied with Al Qaeda there, to overthrow Assad.

This pro-Al-Qaeda position was news, however, to America’s military personnel in that region.

On 29 September 2016, the Russian news site rusvesna.su headlined«Scandal in the US Army: Obama, we will not fight for your fighters in Syria! – Soldiers protest (PHOTOS, VIDEO)», and they showed alleged U.S. military personnel holding up signs covering their faces, upon which signs were handwritten messages such as:

«I joined the military to protect my family from terrorists»

«Obama, I will not deploy to fight for your Al-Qaeda rebels in Syria. WAKE UP PEOPLE»

«I DIDN’T JOIN THE NAVY TO FIGHT FOR AL QAEDA IN A SYRIAN CIVIL WAR!» 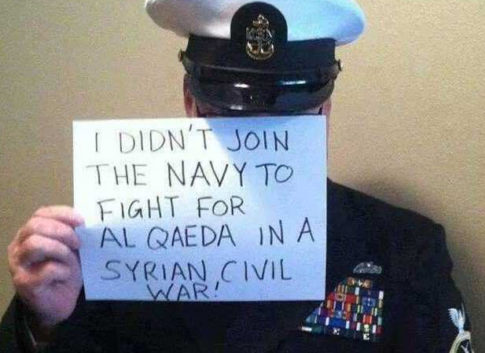 «I will NOT fight for Al Qaeda in Syria»

Whether these men (they all appear to be that) authentically are in-service U.S. military personnel cannot be established conclusively at this time, and no U.S. military would want to be publicly identified as opposing the U.S. government’s instructions, in any case. No active-duty U.S. personnel are likely to identify themselves publicly as refusing to participate in what their Commander-in-Chief is requiring of them.

However, at the very top of the U.S. military command, in the Joint Chiefs of Staff, there have, in fact, been resignations and firings by President Barack Obama, in order to keep the Syrian war going in this way: as a joint U.S.-and-jihadist effort. Though the great investigative journalist Seymour Hersh could not obtain U.S. publication for his major reports about the Syrian war, the London Review of Books has been publishing these reports; and one of them, «Military to Military», on 7 January 2016, stated that:

Barack Obama’s repeated insistence that Bashar al-Assad must leave office – and that there are ‘moderate’ rebel groups in Syria capable of defeating him – has in recent years provoked quiet dissent, and even overt opposition, among some of the most senior officers on the Pentagon’s Joint Staff. Their criticism has focused on what they see as the administration’s fixation on Assad’s primary ally, Vladimir Putin. In their view, Obama is captive to Cold War thinking about Russia and China, and hasn’t adjusted his stance on Syria to the fact both countries share Washington’s anxiety about the spread of terrorism in and beyond Syria; like Washington, they believe that Islamic State must be stopped… Lieutenant General Michael Flynn, director of the DIA between 2012 and 2014, confirmed that his agency had sent a constant stream of classified warnings to the civilian leadership about the dire consequences of toppling Assad. The jihadists, he said, were in control of the opposition.

…By the late summer of 2013, the DIA’s assessment had been circulated widely, but although many in the American intelligence community were aware that the Syrian opposition was dominated by extremists the CIA-sponsored weapons kept coming… General Dempsey and his colleagues on the Joint Chiefs of Staff kept their dissent out of bureaucratic channels, and survived in office. General Michael Flynn did not. ‘Flynn incurred the wrath of the White House by insisting on telling the truth about Syria,’ said Patrick Lang, a retired army colonel who served for nearly a decade as the chief Middle East civilian intelligence officer for the DIA. ‘He thought truth was the best thing and they shoved him out. He wouldn’t shut up.’ Flynn told me his problems went beyond Syria. ‘I was shaking things up at the DIA – and not just moving deckchairs on the Titanic. It was radical reform. I felt that the civilian leadership did not want to hear the truth. I suffered for it, but I’m OK with that.’

Dempsey resigned voluntarily: he took retirement, on 25 September 2015, when Obama replaced him with Joe Dunford, whose views at the time were unknown, except that a CFR neoconservative and champion of the «Maximalist» position of the U.S. in international relations, Stephen Sestanovich, praised the new head of the Joint Chiefs of Staff as «‘Fighting Joe’ Dunford»; and, to paraphrase a cliché: it takes a neoconservative to recognize a neoconservative. But neither Sestanovich nor Dunford would say anything about their views on Syria.

But then, during a press conference on 29 March 2016, Dunford said:

The Russian military presents the greatest array of threats to U.S. interests… Our primary partners on the ground, the Syrian Democratic Forces, have been successful in recovering a large swath of ground in northeast Syria. And I’ll call them the SDF… The adversary knows exactly what the threshold is for us to take decisive military action. So they operate below that level. They continue to advance their interests and we lose competitive advantage. And, frankly, our interests are adversely affected.  And for me it’s actually one of the most significant challenges that we’re dealing with right now.

This view of Russia as being America’s main enemy, is entirely consistent with Barack Obama’s «National Security Strategy 2015», which identified Russia as by far the world’s most «aggressive» nation. In other words: Russia is a continuation of the Soviet Union, in both Obama’s and Dunford’s view. The United States overthrew many heads-of-state who were friendly toward Russia — Saddam Hussein in 2003, Muammar Gaddafi in 2011, Viktor Yanukovych in 2014, and have been targeting Bashar al-Assad ever since at least 2011 — but calls Russia, by far, the world’s most aggressive nation.

Martin Dempsey didn’t want to serve in such a military (i.e., in a military led by a President such as that), nor did Michael Flynn, but it’s what Barack Obama demands. (He demands the overthrow of Assad.) And, therefore, Dunford can talk now about having (via America’s allied «primary partners on the ground») «been successful in recovering a large swath of ground in northeast Syria», as if the U.S. (and its allies, Saudi Arabia, Qatar, UAE, and Kuwait, which pay those «primary forces on the ground» — and Turkey, which provides the jihadists passage into Syria) have any right to that land. Obama is out for conquest, not peace, but whether he will carry this all the way to World War III, isn’t yet known.

Furthermore, as the independent journalist Rick Sterling at Consortium News put the matter, on September 23rd, some proponents of overthrowing Assad:

actively call for U.S./NATO military intervention through a «No Fly Zone,» which would begin with attacks upon and destruction of government anti-aircraft positions and aircraft.

Taking over the skies above another country is an act of war that would require a major U.S. military operation, according to senior American generals.

The New York Times reported that in 2012 General Martin E. Dempsey, chairman of the Joint Chiefs of Staff, told the White House that imposing a no-fly zone in Syria would require up to 70,000 American servicemen to destroy Syria’s antiaircraft system and then impose round-the-clock control over Syrian airspace.

General Carter Ham, former commander of the U.S. Africa Command who oversaw the aerial attacks on Libya in 2011, said on CBS News that «I worry sometimes that, when people say ‘impose a no-fly zone,’ there is this almost antiseptic view that this is an easily accomplished military task. It’s extraordinarily difficult…

«It first entails — we should make no bones about it. It first entails killing a lot of people and destroying the Syrian air defenses and those people who are manning those systems. And then it entails destroying the Syrian air force, preferably on the ground, in the air if necessary. This is a violent combat action that results in lots of casualties and increased risk to our own personnel».

In other words, an appeal for a «no-fly zone» is not a call for a non-violent solution. It is seeking a bloody act of war by the United States against Syria, a nation that poses no threat to America.

Although there might still be some resistance remaining at the top levels of the U.S. military against the restoration and heating-up of the formerly Cold War against the USSR (now against only Russia and any head-of-state who isn’t hostile toward it), Obama has probably by now eliminated almost all of those people at the top level; and so virtually the only U.S. military personnel who oppose the increasingly hot U.S. war against Russia could be the troops who would be ordered to do the killing and dying in that war. They would face a choice of either resigning and losing their means-of-livelihood and much else, or of fighting and maybe dying for a cause that they think to be evil (allied with Al Qaeda).

There is no public sign yet of any such mutiny against the U.S. regime, either by its soldiers, or by its subjects.

Two articles may be especially relevant to understanding why this would be the case. One is  «Russia Finds – Shaming The U.S. Government Into Action Can Work», from the brilliant blogger who goes by the name «Moon of Alabama». The other is, «How Bamboozled the American Public Are About Syria», from me. Whereas the former article focuses upon the U.S. government’s operation to fool the American people into believing that ‘their’ government cares about fighting Al Qaeda in countries where Al Qaeda is actually instead a crucial ally of the American government against Russia and allies of Russia, the latter article focuses upon the enormous success of that governmental lying-operation.

But the success of Obama’s lying-operation has been even more striking in regards to Ukraine, Crimea, and Donbass — a matter which the head of Stratfor called «the most blatant coup in history», but which the American people still believe to have been a ‘democratic revolution’ that overthrew a ‘dictator’. It was an extraordinarily bloody coup there. And, as a result of it, Crimeans were terrified and overwhelmingly sought, and then obtained, Russian protection, and citizenship; and Donbassers were terrified and broke away from the newly installed Ukrainian regime, and likewise sought Russian citizenship, but were turned down by Putin, who regrettably provided only military and humanitarian assistance against the constant bombing by the newly installed nazis in Ukraine.

The economic sanctions against Russia that Obama had imposed by alleging that Putin ‘stole’ Crimea, caused Putin to say no to Obama’s millions of victims in Donbass. Russia accepted approximately a million refugees from Donbass, but Obama (via his paid nazi surrogates) basically destroyed Donbass (though not as much as he’s destroying Syria via his paid Al Qaeda etc. surrogates, a country that he wants even more to conquer, because the Saudi royal family demand it and are actually paying most of the bills for it). (Europe’s taxpayers are paying most of the bills for Obama’s conquest of Ukraine, and Europe also gets many of the refugees from there.)

So: these are some of the reasons why there is no mutiny.