“It’s a really exciting discovery for us, and we think it’s really exciting for the state of Alaska,” Caelus CEO Jim Musselman said in a phone interview with Bloomberg. “They need a shot in the arm now.”

“It is not going to be easy, but we’ve had projects like this around the world,” Musselman told The Wall Street Journal. He formerly led Kosmos Energy when it recorded a massive oil discovery of the coast of Ghana about a decade ago.

The one thing that Caelus has in its favor is strong support from the state of Alaska. Desperate to halt declining output and cratering state revenues, the Alaskan government has been frantically searching for ways to increase oil production. Output has been falling from Alaska’s aging North Slope, with production down below 500,000 barrels per day from a peak in the late 1980s at over 2 million barrels per day.

Shrinking output has been squeezing the state for some time, but it could soon become a much more acute problem for state finances if the declines are not reversed. That is because the Trans-Alaskan Pipeline System (TAPS), which runs from the North Slope across the state to the south, is threatened by low oil flows. When the system sees oil flows drop below 500,000 bpd, risks to pipeline integrity grow. Water can separate from the oil and freeze, corroding the pipeline. Also, lower flows can lead to lower oil temperatures, again leading to water freezing and corrosion. Lower oil temperatures can also lead to soils surrounding the pipeline to freeze – frost heaves can cause movement in the pipeline itself, leading to damage.

At some point, as these problems grow worse, the pipeline could be forced to shut down, putting North Slope oil production into jeopardy altogether.

As a result, the Alaskan government is keen to see more oil fields come online. “In this day and age of technology and regulatory requirements, I am sure it will be done safely,” Alaskan Governor Bill Walker said after the Caelus Energy discovery was announced. “We look forward to the discovery being turned into oil in the pipeline.” Caelus estimates that the field could eventually produce 200,000 barrels per day, which would substantially extend the life of the Trans-Alaskan Pipeline.

State support does not mean the oil field will necessarily move forward. Caelus has drilled two wells, and needs to drill another in order to learn more about the field. But drilling can only be conducted in winter months when the ground is frozen. The company is not prepared to drill this winter, so it can’t proceed with another well until early 2018. Development costs, not to mention the cost to construct the pipeline, will be steep – on the order of $8 to $10 billion. Higher oil prices are probably needed for full-scale development to make sense – as high as $65 per barrel plus “certainty on state tax policy and incentives,” Musselman told Bloomberg. “A lot of the investment decision is going to revolve around what happens within the state from a regulatory standpoint,” he said. But if things go according to plan, production could begin in 2022.

“It is a massively complex, massively expensive undertaking to get that (oil) to market,” Cody Rice, a principal analyst at Wood Mackenzie, told The Wall Street Journal in an interview. But with Royal Dutch Shell and other oil majors abandoning offshore drilling in the Arctic, Caelus’ shallow-water discovery could be one of Alaska’s last best hopes to keep its oil industry alive. 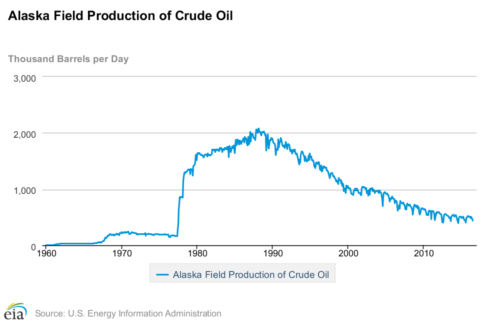