It is no secret that one of the most admirable qualities of the German public – in addition to its striking propensity for thrift in the aftermath of Weimar – is its stoic patience and pragmatism when dealing with adversity. However, over the past month, we grew increasingly confident that said patience would be tested, if only when it comes to matters of monetary trust vis-a-vis the local, neighborhood bank. First it was the news that Raiffeisen Gmund am Tegernsee, a German cooperative savings bank in the Bavarian village of Gmund am Tegernsee, with a population 5,767, finally gave in to the ECB’s monetary repression, and announced it’ll start charging retail customers to hold their cash. Then, just last week, Deutsche Bank’s CEO came about as close to shouting fire in a crowded negative rate theater, when, in a Handelsblatt Op-Ed, he warned of “fatal consequences” for savers in Germany and Europe – to be sure, being the CEO of the world’s most systemically risky bank did not help his cause.

That was the last straw, and having been patient long enough, the German public has started to move. According to the WSJ, German savers are leaving the “security of savings banks” for what many now consider an even safer place to park their cash: home safes.

Indeed, as even the WSJ now admits, for years, “Germans kept socking money away in savings accounts despite plunging interest rates. Savers deemed the accounts secure, and they still offered easy cash access. But recently, many have lost faith.” We wondered how many “fatal” warnings from the CEO of DB it would take, before this shift would finally take place. As it turns out, one was enough.

To be sure, the Germans are merely catching up to where the Japanese were over half a year ago. As we wrote in February, “look no further than Japan’s hardware stores for a worrying new sign that consumers are hoarding cash–the opposite of what the Bank of Japan had hoped when it recently introduced negative interest rates. Signs are emerging of higher demand for safes—a place where the interest rate on cash is always zero, no matter what the central bank does.

“In response to negative interest rates, there are elderly people who’re thinking of keeping their money under a mattress,” one saleswoman at a Shimachu store in eastern Tokyo told The Journal, which also says at least one model costing $700 is sold out and won’t be available again for a month. 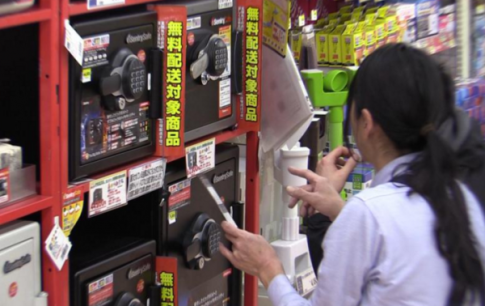 “According to the BOJ theory, they should have moved their funds into riskier but higher-earning assets. Instead, they moved into pure cash that earned nothing,” Richard Katz, author of The Oriental Economist newsletter wrote this month.

“It doesn’t pay to keep money in the bank, and on top of that you’re being taxed on it,” said Uwe Wiese, an 82-year-old pensioner who recently bought a home safe to stash roughly €53,000 ($59,344), including part of his company pension that he took as a payout.

Burg-Waechter KG, Germany’s biggest safe manufacturer, posted a 25% jump in sales of home safes in the first half of this year compared with the year earlier, said sales chief Dietmar Schake, citing “significantly higher demand for safes by private individuals, mainly in Germany.”

Burg-Waechter KG, Germany’s biggest safe manufacturer, posted a 25% jump
in sales of home safes in the first half of this year compared with the
year earlier, said sales chief Dietmar Schake, citing “significantly higher demand for safes by private individuals, mainly in Germany.” 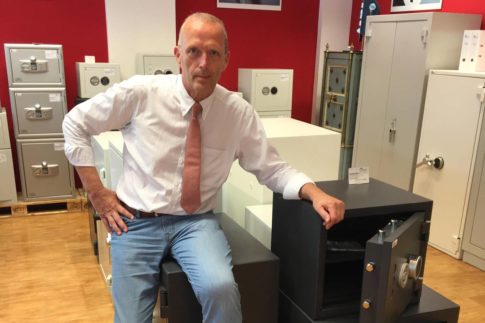 The biggest irony in all of this, as we first pointed out last October, is the epic mistake that central bankers did by unleashing negative rates: instead of forcing savers to spend, it has – at least in the case of Japan and Germany – forced them to not only pull their cash out of the bank, thereby further slowing the velocity of money, but to save even more, forcing central bankers to come up with even more unprecedented “solutions” to a problem of their own creation.

As the WSJ adds, in a country where few people buy stocks, the possibility of having to pay fees on deposits has turned savers’ world—and their piggy banks—upside down.

“The moment the bank tells me I have to pay interest on my deposit I’ll take my €50,000 or whatever it is and put it under my pillow, or buy a safe and stick the money inside,” said Dagmar Metzger, a 53-year-old entrepreneur in Munich.

Alas, with every passing day, that moment gets ever closer.

Meanwhile, for those who can’t find or afford a safe, there are other options. Ms. Metzger, a game hunter, said she would also consider squirreling cash away in her gun cabinet, which has solid locks. Paying to save is “preposterous,” said Marlene Marek, 58, owner of a Frankfurt bistro. “I would rather withdraw my money and stash it at home, or keep it in a safe-deposit box at a bank.”

She is not the only one – many Germans have a similar idea, which has led to safes selling out, and creating waiting lists for safe-deposit boxes in some big cities as a growing number of Germans prefer self-sufficiency. “When you put money in a safe-deposit box, everyone notices, and you’re paying fees,” said Mr. Wiese, the Hamburg retiree, who said his new safe is roughly twice the size of a hotel safe.

And while one could blame retail savers for being conspiracy theorist nuts, in Germany it is the very biggest corporations who have been, throughout 2016, rebelling against the ECB’s idiotic policies. Indeed, banks and other financial institutions themselves are also keeping more cash. As we reported earlier in the year, reinsurance giant Munich Re AG said earlier this year it would cache over €20 million in cash in a safe, alongside gold bars the company stockpiled two years ago.

“We are testing that and are happy that this works without any glitches and at reasonable costs,” said Chief Financial Officer Jörg Schneider. The reinsurer said it would consider augmenting its cash stash.

Finally, in what may be the pinnacle fo practicality over stupidity, Germans are particularly focused on safes because they prefer cash to plastic. “Only cash is real,” goes an old saying.

Well, yes, until it is confiscated as sad Harvard economists have been urging in recent months.

Unlike their more “hip” Scandinavian peers, roughly 80% of German retail transactions are in cash, almost double the 46% rate of cash use in the U.S., according to a 2014 Bundesbank survey. Germans also keep more cash in their wallets and visit ATMs more often, withdrawing on average $256 at a time, the study found. Americans withdraw $103 on average.

Germany’s love of cash is driven largely by its anonymity. One legacy of the Nazis and East Germany’s Stasi secret police is a fear of government snooping, and many Germans are spooked by proposals of banning cash transactions that exceed €5,000. Many Germans think the ECB’s plan to phase out the €500 bill is only the beginning of getting rid of cash altogether.

And they are absolutely right; we can only wish more Americans showed the same foresight as the ordinary German.

Meanwhile, the WSJ concludes, Ms. Metzger is a member of an activist group demanding the existence of cash be guaranteed in Germany’s constitution.  “I don’t want to become completely transparent,” she says.”I don’t want everyone to know whether I buy chocolate, strawberries or mangoes at the store.”

Alas, if “erudite” Harvard economists like Larry Summers and, now, David Rogoff get their way, Ms. Metzger’s, and everyone else’s, worst nightmare will soon come true.

Until that moment, however, as a final reminder, in a fractional reserve banking system, only the first ten or so percent of those who “run” to the bank to obtain possession of their physical cash and park it in the safe will succeed. Everyone else, our condolences.