Gang members chanted “black lives matter” as they viciously beat up a white victim in Charleston as part of an initiation ritual, a story that has received no national media attention.

In a video posted on Facebook, Brandon Reiter relates how he was driving home before picking someone up to “help them get home”.

A woman was “frantically waving her arms on the side of the road” and Reiter offered her a ride, reports Counton2.com.

When he arrived at the destination, Reiter’s passenger stole the tip money he had on his counter and when Reiter exited the vehicle, he was immediately surrounded by two black men and had a gun put to his head.

A member of the gang known as “Blue” ordered the other gang member to shoot Reiter, before Reiter was able to snatch the gun away and run back to his truck

However, other members of the gang were waiting for him and subjected Reiter to a brutal beat down that was part of a gang initiation ritual.

“I was kicked, punched, hit in the head with the gun, had my life threatened….they made him kick me, they made him punch me,” he said.

Reiter reveals that the gang members were chanting “black lives matter” as they viciously beat him up, before stealing his wallet and cellphone.

The attack left Reiter with 13 staples on his scalp and numerous bruises. 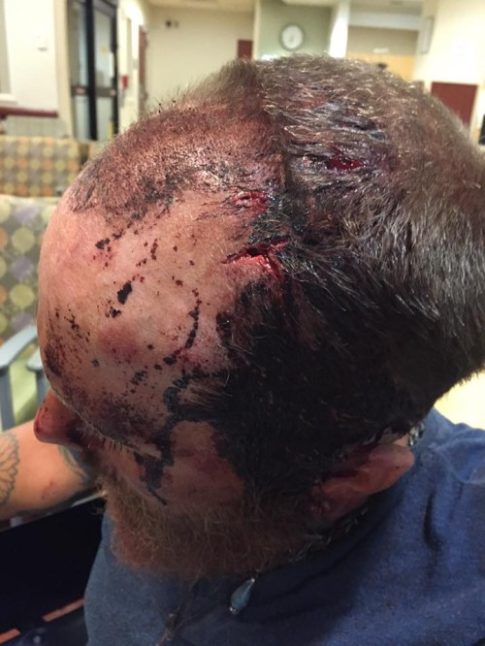 The video has gone viral on Facebook, receiving over 700,000 views and more than 10,000 shares. Reiter is seen bleeding from his head and has wounds over his face as a result of the attack.

“Is this an example of what you want to portray to people of the black nation of what matters?” asked Reiter, adding, “You just beat the crap and almost killed someone that actually loves everyone.”

“I’m going to the hospital because my life matters,” remarked Reiter, adding that the Charleston Police Department arrived on the scene but only seemed to be interested in “making sure I didn’t say anything I wasn’t supposed to say.”

The vicious assault Reiter was subjected to received little media attention, with only a couple of local television stations reporting on it. If the roles had been reversed, with a white gang beating up a black man in a racially motivated attack, the story would have made national headlines.

As we reported last week, during the riots in Milwaukee, Black Lives Matter supporters were caught on tape calling for white people to be hunted down and attacked. An 18-year-old white man was later shot in the neck.