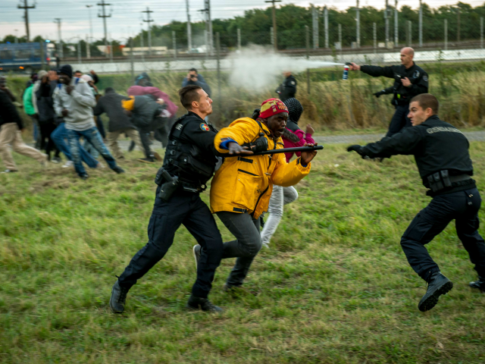 The situation at the Calais ‘Jungle’ camp has become “uncontrollable” as police numbers drop and migrant numbers rise, the town’s mayor has said.

Natacha Bouchart said that migrant numbers at the camps around Calais had reached a record 9,000 and is continuing to grow, with about 100 new arrivals each day.

Meanwhile, police union delegate Denis Hurth said the number of officers in the town had declined, with fewer than 1,000 presently in Calais, compared to 1,300 in August last year. By comparison, there were only 6,000 migrants in the town last August.

Ms Bouchart said many officers had been redeployed to the European football championship in June and not been sent back after it had concluded.

As a result, people smugglers and far left activists have been able to strengthen their hold on the camps, while migrants themselves are becoming more daring in attacking vehicles and attempted to stow away on trucks heading for the UK.

“The police are not enough and they are exhausted,” Ms Bouchard told France 3.

“It has been over a year since I have been asking for the army to come. Today, there is no vetting system, we do not know who is coming out and who is leaving.

“There is a state of war in France and Calais is part of France so we do not understand why there are not the same rules as in the rest of the country. The laws of the Republic must be enforced.”

She also told radio station RTL that migrants were stepping up attacks on traffic in the local area, and were being helped not only by people smugglers but also members of radical far left group No Borders.

“It goes from iron bars and baseball bats to tear gas and burning mattresses, or tree trunks thrown into the ring road to create incidents,” she said. “Groups organise themselves to attack en masse several times a night.”

Breitbart London reported earlier this week on reports of migrants attacking traffic “just for fun”. One local resident posted a photo on Facebook of her brother-in-law’s car, which had its windscreen, back window and side mirror smashed by migrants wielding bats.

“Tell your relatives so that they can avoid it happening to them,” the woman wrote.