Two weeks ago, we asked readers to spot the “odd inflation out” when looking at the map below.

The reference, of course, was to the state by state surge in proposed 2017 Obamacare premiums, contrasted with what the government contends is a modest 1.0% inflation rate.

Now, courtesy of a new study by independent analyst Charles Gaba – who has crunched the numbers for insurers participating in the ACA exchanges in all 50 states – we can also calculate what the average Obamacare premium increase across the entire US will be: using proposed and approved rate increase requests, the average Obamacare premium is expected to surge by a whopping 24% this year.

As Politico notes, Cigna and Humana recently revised their rate requests in Tennessee, and the new filings are dramatically higher. Cigna is now asking for a 46% average increase, up from 23%, and Humana is requesting a 44% increase, up from 29%, The Tennessean reported on Friday. Expect these numbers to rise even more as insurance companies exit even more states.

So far, the average approved rate increase is roughly 17% according to weighted averages across just five states, Mississippi, New York, Oregon, Rhode Island and Vermont, Gaba reports. “Combined, all [five states] only make up around 6.3 percent of the total population,” Gaba writes. “The numbers will no doubt jump around quite a bit as additional, larger states are plugged into the mix.”

Here is what Charles Gaba calculated:

[I] noted that since I originally crunched the numbers for some states as far back as April, the situation in some states has likely changed somewhat due to carriers dropping out, joining in or re-submitting their rate request filings.

There have been significant changes to the requested rate filings in at least four states: Arizona, Connecticut, Maryland and Tennessee. In all four cases, I’m afraid the statewide weighted average has increased, either due to resubmitted filings, a carrier dropping out or both.

As a result of these updates, the national average increase requested now stands at 23.9%, up from the previous average of 23.3%.

Gaba will have to redo his numbers again, as moments ago Aetna announced that in 2017 it would exit 11 of 15, or more than two thirds, of Obamacare state exchanges in which it was a participant as of this calendar year. The only states in which Aetna will continue to provide Obamacare, are Delaware, Iowa, Nebraska and Virginia. Here is what CEO Mark Bertolini said in a statement:

“Following a thorough business review and in light of a second-quarter pretax loss of $200 million and total pretax losses of more than $430 million since January 2014 in our individual products, we have decided to reduce our individual public exchange presence in 2017, which will limit our financial exposure moving forward. More than 40 payers of various sizes have similarly chosen to stop selling plans in one or more rating areas in the individual public exchanges over the 2015 and 2016 plan years, collectively exiting hundreds of rating areas in more than 30 states. As a strong supporter of public exchanges as a means to meet the needs of the uninsured, we regret having to make this decision.

And while as a result of this latest exit, rates are set to go up even more, here is how much more citizens in various US states can expect to pay for their health insurance. 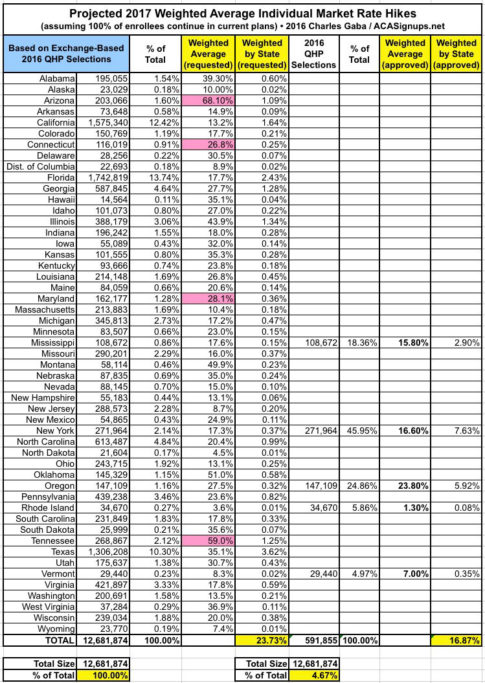