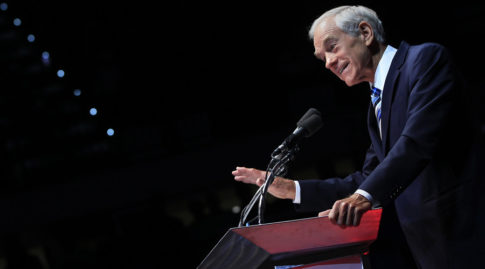 Hillary Clinton wants to spend large amounts of money on infrastructure, but Donald Trump went further by saying he wants to about double the amount in that area, Ron Paul, former presidential candidate and host of Ron Paul Liberty Report, told RT.

Trump, the Republican nominee for the US presidency, gave a speech on Monday in Detroit in which he outlined his plans for revitalizing the working and middle class by bringing jobs back to US shores, striking a somewhat populist tone.

However, Trump’s speech followed the release of a list of 13 economic advisers that would assist him if elected. The list includes hedge fund managers and billionaires. Some say it confuses Trump’s message on the economy.

RT:What is your take on Trump’s statements?

Ron Paul: I don’t think they can make a whole lot out of it. They could be confused if they tried to be specific in understanding what he is doing. Hedge fund managers are going to have an interest. They certainly aren’t going to argue my position that we need less Federal Reserve intervention. They like the idea that there is a plunge protection team and that they can play these games of printing more money and the stocks go up, the bonds go up, and this sort of thing. It looks like they’re going to do that. I think on the tax issue we might be able to give him a little more credit when he starts talking about the taxes. I especially thought it was good, if he could get it passed, and that is getting the corporate rate down to 15 percent. That would be magnificent if he could. But the odds of that happening are very slim.

RT:Do you think that’s an empty promise when Trump talks about cutting taxes? Can any Republican presidential candidate really deliver on that?

RP: Well, no politician by themselves can deliver on that. A president can lead and hopefully get things passed, but he can’t do this all by himself. If we look at this in context of a campaign, it is good campaign rhetoric. It even gets my attention: ‘Oh boy, this would be good, if it could only be passed.’ But I don’t think anybody can depend on it.

The other thing I don’t like about the inconsistency here is that if you really want to cut taxes you ought to at least consider cutting spending. But I don’t hear a whole lot of that from either of the candidates. Hillary wants to spend a lot of money on infrastructure, which is not a bad idea if it is done in a proper manner. But Trump outdid her; he wants to about double the amount on infrastructure. He doesn’t say, like I have said over the years, what we need is a little less militarism – we don’t need to be running an empire and having troops around the world. We need to bring troops home. He wants to massively increase [military spending], claiming that we’re way behind; he wants to rebuild the military, and at the same time lower taxes. It doesn’t add up economically. And who knows that even if they did try there are economic laws that eventually bring these things down – such as an unsustainable deficit and the markets just reject it.

So the inconsistency that most politicians have by pandering to special interest groups, whether it is the hedge funds’ operators, or whether it is for the people who want lower taxes, or whatever, or going into the issue of protectionism – this is all done for political grandstanding. I don’t think people should take much stock in it. I think it’s the same way with the platforms that the parties write. No one even looks at them after they’re written. So there are empty promises too often.

RT:Which of the two candidates do you think would really be tougher on Wall Street at the end of the day?

RP: If you look carefully, Hillary would like to think that, but her connection to Wall Street is probably every bit as strong, if not stronger, than Trump’s. She has traditionally raised a lot of money from Wall Street. I don’t think you can trust a thing when she says she is against corporatism. Sanders had a little more credibility when he talked about that. But she doesn’t have any credibility there. Trump is an unknown, so you can’t say: ‘I know exactly what he is going to do,’ because I am not sure he knows exactly what he is going to do or what his position will be tomorrow, and then the next day.

RT:One of the issues that seems to be a constant theme in every Trump speech is his criticism of trade deals, of trading partners, namely China. He accused China of illegally subsidizing exports, manipulating its currency, stealing intellectual property. What are your thoughts on those criticisms?

RP: There are always partial truths in some of these charges. But I think the way he goes about it is absolutely negative. He strongly endorses increasing tariffs. Just two months ago, we put a 500 percent increase on the tariff of steel coming from China. And China is the biggest steelmaker in the world – they produce more than half the steel of the world, because they have good steel and it’s cheap. So we’re going to put huge tariff on that – not only would our country suffer, but anybody who puts a tariff on it makes the prices go up, which affects the consumers. So he is into that.

But we do already live in an age of protectionism. They pretend that free trade is going on and the WTO [World Trade Organization] does this. But there are like thousands of types of tariffs on individual items that we participate in. To do this bashing of other countries and not looking at ourselves is the wrong way to go. We do a lot of manipulating too, and we have tremendous privilege, because we’re the only [ones] with the reserve currency, we also have license to do a lot more than anything that the other countries can do.