Last month, the Wall Street Journal published an interview with France’s director of domestic intelligence, Patrick Calvar. “The confrontation is inevitable,” Mr. Calvar said. There are an estimated 15,000 Salafists among France’s seven million Muslims, “whose radical-fundamentalist creed dominates many of the predominantly Muslim housing projects at the edges of cities such as Paris, Nice or Lyon. Their preachers call for a civil war, with all Muslims tasked to wipe out the miscreants down the street.”

These Salafists openly challenge France’s way of life and do not make a secret of their willingness to overthrow the existing order in Europe through violent means, terror attacks and physical intimidation. But paradoxically, if the Islamists’ threat to Europe were confined to the Salafists, it would be easier to defeat it.

There is in fact another threat, even more dangerous because it is more difficult to decipher. It has just been dubbed by the magazine Valeurs Actuelles,“the quiet conquest“. It is “moderate” Islam’s sinuous project of producing submission. “Its ambition is clear: changing French society. Slowly but surely”.

That threat is personified in the main character of Michel Houellebecq’s novel, Submission: Mohammed Ben Abbes, the “moderate” Muslim who becomes France’s president and converts the state to Islam. And from where does President Ben Abbes start his Islamization? The Sorbonne University. It is already happening: Qatar recently made a significant donation to this famous university, to sponsor the education of migrants.

In France, the quiet conquest has the face of the Union of the Islamic Organizations of France (UOIF), which a Simon Wiesenthal Center report charged with “anti-Semitism, advocacy and financing of terrorism and call to Jihad… ”

Not only does UOIF not encourage the integration of Muslims in France,” the report states, “it actually provides a nursery for the most radical Islamist positions.”

In Italy we have just witnessed the strategy of this “moderate Islam.” The largest and most influential Islamic organization, l’Unione delle comunità ed organizzazione islamiche in Italia (Ucoii), sponsored Milan’s first Muslim councilwoman, Sumaya Abdel Qader, a veiled candidate of the center-left coalition. Qader’s husband, Abdallah Kabakebbji, openly called for the destruction of the State of Israel: “It is a historical mistake, a scam”, he wrote on Facebook. His solution? “Ctrl + Alt + Delete”.

Qader won the race over a real moderate Muslim, the unveiled Somali activist, Maryan Ismail. I met Mrs. Ismail at a pro-Israel forum in Milan. After losing the election, she broke with Italy’s Democratic Party in an open letter: “The Democratic Party has chosen to dialogue with obscurantist Islam. Once again, the souls of modern, plural and inclusive Islam were not heard”.

Take two “stars” of this French “moderate Islam.” The first one is Tariq Ramadan, the grandson of Hassan al-Banna, the founder of the Muslim Brotherhood, the motto of which is: “Allah is our objective; the Prophet is our leader; the Quran is our law; Jihad is our way; dying in the way of Allah is our highest hope.”

Ramadan does not hide in Raqqa or shoot at French citizens. By applying for French citizenship, he would like to become one of them. His office is in the Parisian suburb of Saint Denis; he has written 30 books and he has two million Facebook followers. Ramadan has academic chairs all over the world, he is the director of the Research Center for Islamic Law in Doha (Qatar) and the president of the European Muslim Network. He publicly campaigns for Islam along with Italy’s former prime minister, Massimo D’Alema. Ramadan recently explained his vision for Europe and France: “Islam is a French religion and the French language is a language of Islam”.

Ramadan’s project is not the hoped-for Europeanization of Islam, but the not-hoped-for frightful Islamization of Europe. He opposes the assimilation of Muslims into French culture and society. A few days before the election in Milan, Ramadan was in Italy to endorse the candidacy of Sumaya Abdel Qader.

The second French “star” is Dalil Boubakeur, the rector of the Grand Mosque of Paris. In 1989, Boubakeur justified the persecution of Salman Rushdie by Ayatollah Khomeini. In 2002, he testified for the prosecution against the writer Michel Houellebecq. In 2006, he sued Charlie Hebdo in court, after the publication of the Danish Mohammed cartoons. Last year, Boubakeur called for the conversion of churches into mosques and asked to “double” the number of mosques in France. 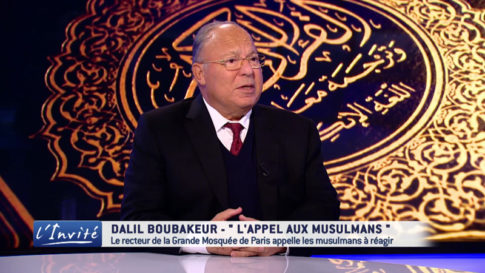 Dalil Boubakeur, rector of the Grand Mosque of Paris, last year called for the conversion of churches into mosques and asked to “double” the number of mosques in France. (Image source: TV5 Monde)

In the United Kingdom, mainstream Muslim organizations are dispensing “Islamic justice” through more than 85 sharia courts attached to mosques. Divorce, polygamy, adultery and wife-beating are only some of these courts’ matters of jurisprudence. In Germany, vice-chancellor Sigmar Gabriel criticized Saudi Arabia for financing Islamic extremism in Europe. It is the same kingdom which last year offered to build 200 new mosques in Germany.

Qatar, with its Al Jazeera television megaphone, is also very active in sponsoring Muslim Brotherhood Islamic radicalism all over Europe. The Qatari royal family, for example, in 2015 donated £11 million to Oxford’s St. Anthony’s College, where Tariq Ramadan teaches. Qatar also announced that it was willing to spend $65 million in the French suburbs, home to the vast majority of the six million Muslims in France.

Today in Europe, several scenarios are possible, including the worst. Among them, there is a civil war, which many are beginning to talk about, including Patrick Calvar, the director of domestic intelligence. This is what the Islamic State is looking for: unleashing a blind repression so that the Muslim population will show solidarity with the revolutionary minority. Yet, there is still worse possible outcome: that nothing happens and we continue as is.

The end is more important than the means. The Islamic State has the same goal as most of the members of so-called “moderate Islam”: domination under the sharia. Many supposedly “moderate Muslims”, even if they do not commit violent acts themselves, support them quietly. They support them by not speaking out against them. If they do speak out against them, they usually do so in coded terms, such as that they are “against terrorism,” or that what concerns them about violent acts by Muslims is the possibility of a “backlash” against them.

Violent jihadis, however, are not the only means of transforming Europe, and perhaps are even counterproductive: they could awaken the nations they attack. Soft and more discreet means, such as social pressure and propaganda, are even more dangerous, and possibly even more effective: they are harder to see, such as the West’s acceptance of dual judiciary and legal systems; sharia finance (if there had been a “Nazi finance” system, in which all financial transactions went to strengthening the Third Reich, what effect might that have had on World War II?), and the proliferation in the West of mosques and extremist Islamic websites. Although there are indeed many real “moderate Muslims”, there are also still many who are not.

To conservative Muslims, however, any Muslim who does not accept every word of Allah — the entire Koran — is not a true Muslim, and is open to charges of “apostasy”, the punishment for which is death. According to a leading Sunni theologian, Yusuf al-Qaradawi, based in Qatar, “If they [Muslims] had gotten rid of the punishment for apostasy, Islam would not exist today.”

That is why the late writer Oriana Fallaci once said to The New Yorker: “I do not accept the mendacity of the so-called Moderate Islam”. That is why real “moderate Muslims” are silenced or murdered.

This might summarize the current Islamic mainstream mentality: “Dear Europeans, continue to think about a shorter working week, early retirement, abortion on demand and adultery in the afternoon. With your laws, we will conquer you. With our laws, we will convert you”.