– Obamacare On “Verge Of Collapse” As Premiums Set To Soar Again In 2017:

If Obamacare enrollments continue their current trend and insurers continue to hike premiums at alarming rates then Republicans may not have to worry about “repealing and replacing Obamacare” as it might just work itself out “naturally”.  The 4th open enrollment period for Obamacare begins on November 1, 2016 and industry experts are warning that another year of tepid demand from “young and healthy” Americans could force more insurers out of the exchanges effectively marking the end of Obamacare as we know it.  According to a story published by The Hill, 11 million people bought health insurance through the exchanges for 2016 which was drastically below the Congressional Budget Office’s initial projection of 21 million.

Well we’re shocked!  Turns out that whole “adverse selection bias” was a real thing.  So you’re telling us that young, healthy people don’t want to pay for insurance they know they’ll never use?  We guess America’s youth can actually do basic math, after all.  Apparently they were able to figure out they would rather take the lower tax associated with Obamacare penalties than the larger tax associated with buying a healthcare policy they’ll never use.  We guess Millennials are a little less enthusiastic about embracing socialism when the costs are coming out of their pockets.

With America’s youth continuing to shun health insurance, insurers are all racking up massive losses on the exchanges.  For many insurers the losses will simply result in massive premium hikes but others have decided to withdraw from the exchanges all together.  In fact, UnitedHealthCare recently announced plans to exit most state exchanges by 2017 (see our post entitled “Largest US Health Insurer Exits California, Illinois Obamacare Markets“)  Per The Hill:

In the last month, two major insurers – Aetna and Anthem – both reversed course on their plans to expand in the marketplace. Now, all five of the nation’s largest insurers say they are losing money on the exchanges.

“From a policy point of view, we’re basically seeing the exchanges unravel,” said Michael Abrams, a healthcare strategist with Numerof & Associates who consults for insurers including UnitedHealthGroup.

2016 average premiums were up substantially in most states (see map below) and, with no one making money, 2017 seems no better.  According to The Hill:

Already, many insurers this year are proposing substantial rate hikes with the hopes of making up for higher recent medical costs. The average premium increase next year is about 9 percent, according to an analysis of 19 cities by Kaiser Family Foundation. But some hikes are far higher: Blue Cross Blue Shield has proposed increases of 40 percent in Alabama and 60 percent in Texas. 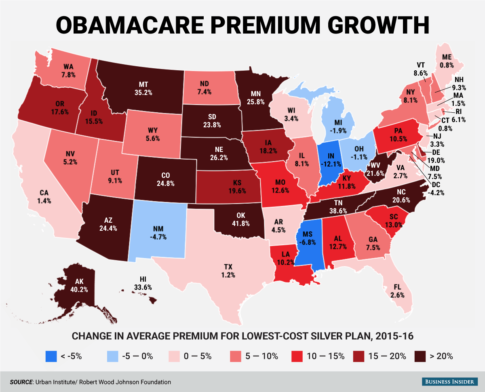 For her part, Hillary Clinton has vowed to stick with Obamacare insisting that taxpayers just need to spend more money on advertising to drive higher enrollments:

Clinton has already laid out plans to help boost enrollment by making coverage more affordable for people who are still priced out of ObamaCare.

Like Obama, she vowed to invest in advertising and in-person outreach to help more people enroll. Clinton would also increase ObamaCare subsidies so that customers spend no more than 8.5 percent of their income on premiums – down from 9.5 percent under current law.

She has also proposed a tax credit of up to $5,000 per family specifically to offset rising out-of-pocket costs – a side effect of cheaper plans offered under ObamaCare.

Right, more advertising should fix it because no one in the country is familiar with Obamacare.  As Obama likes to say when things don’t go as planned, it’s not that Obamacare is bad it’s just that we’ve failed to explain it properly.  No, we think people get and they just don’t like it.

We also find it hard to understand how a Clinton administration could make healthcare cheaper than “free?”  Perhaps we should start paying people to take taxpayer subsidized healthcare?  If at first you don’t succeed, throw more taxpayer money at it…