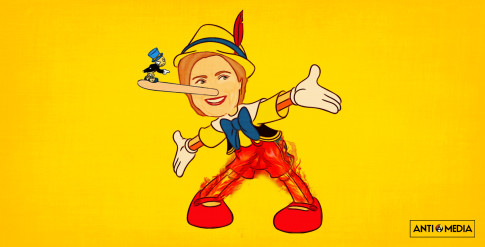 In the latest installment over Hillary Clinton’s email scandal, conservative watchdog group Judicial Watch released 296 pages of new emails from Hillary’s personal server, most of which were not handed over as part of the 30,000 emails originally provided to the FBI.  The emails were provided to Judicial Watch pursuant to a FOIA request.  These new emails, among other things, demonstrate how the Clinton Foundation and it’s top donors sought favors from the State Department within 3 months of Hillary taking the Secretary of State position.

According to an article in the Wall Street Journal:

“That the Clinton Foundation was calling in favors barely 3 months into Hillary Clinton’s tenure at the State Department is deeply troubling, and it is yet another reminder of the conflicts of interest and unethical wheeling and dealing she’d bring to the White House,” said Michael Short, a spokesman for the Republican National Committee, in a statement Tuesday.

The first request for a “favor” came in April 2009, just 3 months after Hillary was confirmed as Secretary of State on January 21, 2009.  The request came from Doug Band, a long-time adviser to Bill Clinton who helped him setup the Clinton Foundation after his Presidency.  Per the email exchange, Mr. Band reached out the State Department to ask a “favor” on behalf of a person who the Clinton Foundation had recently setup with a trip to Haiti which he found “eye-opening” (the name of the person seeking the favor was redacted from the email exchange).  Yes, well trading taxpayer dollars intended for earthquake relief in exchange for lucrative gold mining contracts from the Haitian government can be quite “eye-opening” indeed (see our post “Clinton Cash: “Devastating” Documentary Reveals How Clintons Went From “Dead Broke” To Mega Wealthy“).

In an exchange from April 2009, a longtime aide to Mr. Clinton told three of Mrs. Clinton’s top advisers that it was “important to take care of” a particular person, whose name has been redacted from the document. That person had written the aide, Doug Band, under the subject line “A favor…” to thank him for the “opportunity to go on the Haiti trip,” which the person called “eye-opening.” Mr. Band was a chief adviser in helping Mr. Clinton launch the Clinton Foundation after leaving the White House.

Another request came from Gilbert Chagoury, a long-time associate of the Clintons with a checkered past.  Chagoury is known for his ties to Nigeria’s military dictator, Sani Abacha, who was instrumental in helping him secure some lucrative construction contracts in the mid-90s.  In 2003, Chagoury helped organize a trip to the Caribbean where former President Bill Clinton was “paid” $100,000 for a speech.  Chagoury has also made bribes contributions to the Clinton Foundation of between $1-$5 million.  Per the Wall Street Journal:

“We need Gilbert Chagoury to speak to the substance person re Lebanon,” Mr. Band wrote in April 2009. “As you know, he’s key guy there and to us and is loved in Lebanon. Very imp.”

Mr. Chagoury, a Lebanese-Nigerian billionaire, has donated between $1 million and $5 million to the foundation, according to its disclosures.

Ms. Abedin responded with the name of the State Department official, Jeff Feltman, who had served as a U.S. ambassador to Lebanon before becoming U.S. assistant secretary of state for Near Eastern Affairs. “I’m sure he knows him,” she wrote. “I’ll talk to Jeff.”

Fifteen minutes later, Mr. Band shot back: “Better if you call him. Now preferable. This is very important.”

In yet another email, Clinton chief of staff Cheryl Mills wrote to Hillary to inform her that the NSA was working on a modified blackberry that could be used for personal emails while working in restricted State Department offices.  Even though Clinton thought this was “good news” she continued to just use her personal server anyway.  Per the AP:

So why were these emails not included in the original disclosure to the FBI?  Could it be possible that Hillary believes that using her position as Secretary of State to setup meetings between former U.S. Ambassadors and shady international businessmen is somehow “personal” in nature?  Makes you wonder what else was excluded from the FBI disclosures that was purely “personal.”  Guess we’ll just have to elect her to find out if we can trust her.

The emails obtained by Judicial Watch can be reviewed in their entirety below: