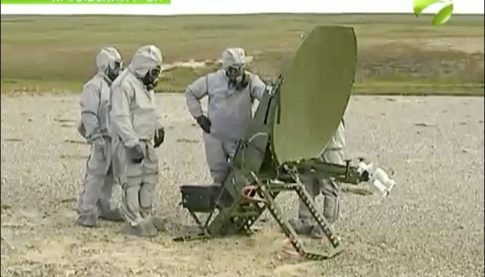 The outbreak originated in a Siberian community after a heat wave melted the permafrost where spores of anthrax remained alive inside the frozen carcass of an infected reindeer. Animals fed on that thawed carcass, which may have been up to a hundred years old, then transmitted it to reindeer that nomadic herders killed and ate.

Herders face a quarantine that may last until September.

The deadly bacteria is also indicated in the mysterious deaths of thousands of reindeer in the region–various reports have placed the total number of dead animals at up to 2,500.

The outbreak happened in the Yamalo-Nenets region of Western Siberia, where an unusual heat wave brought temperatures up to 82 degrees for 18 consecutive days in July.

Temperatures in the Yamal tundra above the Arctic Circle have hit highs of 95 degrees this summer, compared to an average of 77 degrees.

“The medical crisis was caused after reindeer became contaminated with zombie anthrax bacteria which had been frozen in the Siberian permafrost,” reports the Siberian Times.

Zombie anthrax? Let’s break that down.

The regional governor’s office said in a statement to the Siberian Times that the disease probably originated from a thawed reindeer carcass that died from anthrax more than a hundred years ago.

The animal’s dead body was frozen on the tundra long ago, and the bacteria lay dormant. But high temperatures this summer caused the tundra to thaw, and with it, the infected carcass, which was likely encountered by hungry animals seeking food. They fed on the reindeer, and the anthrax bacteria within it. Anthrax is biologically hardy in the extreme, and can remain viable for a century or more even with temperature fluctuations well above and below freezing.

It is also possible that the anthrax was embedded in a human corpse which thawed, and was eaten by vermin, which then transmitted the bacteria up the food chain to humans.

Or, maybe no corpse-eating took place at all. Feeding animals need only to munch a little bit of earth near a place where an infected body is buried, human or animal, to potentially come in contact with anthrax spores.

The bacteria was probably dormant since at least 1941, when the last outbreak occurred.

NBC reports that authorities in the region stopped vaccinating reindeer against anthrax a decade ago, because there had been no outbreaks for over 50 years.

More than 60 people are considered at risk for having been infected in the ‘zombie anthrax’ outbreak of 2016. Some 2,500 reindeer have also died, though some of the animal deaths may be attributable to heatstroke.

“The animals are unaccustomed to such high temperatures,” the governor’s office told the Siberian Times.

Weather.com meteorologists report that Pangody, a town in the heart of the Yamalo-Nenets region, had high temperatures of at least 82 degrees Fahrenheit 18 straight days from July 6-23, peaking at 92.7 on July 23.

The region is home to a large population of Nenets people, a nomadic indigenous group who subsist on herding reindeer.

The Yamalo-Nenets autonomous region is well known as source of high quality venison, a great quantity of which is exported overseas.

The 12-year-old boy who died in the anthrax outbreak on Saturday is reported to have eaten infected reindeer meat, and consumed the animal’s blood. His grandmother died a day earlier, but the cause of her death has not yet been confirmed as anthrax

Russian authorities are evacuating affected people to the regional capital of Salekhard.

“We have taken all measures to isolate the area,” regional Governor Dmitry Kolybin said to the Associated Press. “Now the most important thing is the safety and health of our fellow countrymen — the reindeer herders and specialists involved in the quarantine.”

A mass vaccination of reindeer is taking place in the region, but those efforts may be too late, Russian Academy of Sciences biology professor Vladimir Bogdanov told NBC News.

“This disease has been present in our country for a long time and we have 35,000 officially registered animals with anthrax in burial sites,” Russian sanitary body Rospotrebnadzor spokesperson Julia Demina said. “These are the places where anthrax spores could be found in the soil.”

“We are now conducting another large burial, where we will pour bleach [into the ground], build fences and set up a special marker in navigation systems, so that, for the next 25 years, any grazing of agricultural animals here will be banned,” added Vyacheslav Hritin, head of Salekhard Veterinary Center, which spends a considerable amount of time fighting against the disease. “On the one hand the permafrost began to melt, on the other the animals were short of fodder and they ate the plants together with the land,” explained Professor Irina Donnik, rector of the Ural State Agricultural University. “It is obvious that there was a cattle cemetery here at some stage. This disease is transmitted very rarely from animal to animal; more often it moves via the feed base.”

From the Siberian Times:

Despite this rare sign of hope, the authorities now have two key concerns. The first is fear for the survival of those now suffering from the intestinal form of the disease.

The second is the deep concern that anthrax could spread to other areas of Russia.

A major operation involving Russia’s bio-warfare troops is underway to incinerate at high temperatures the carcasses of the dead infected reindeer. 70 reindeer corpses were ‘eliminated’ on Tuesday morning. A key danger is the spread of infected meat, which is the main carrier of the infection. The specific risk is black market meat from poachers. The regional government last night banned the export of any meat, antlers, or skins from the Yamalski district.