“Now it all makes sense.

With the presstitute main stream media in full disinfo mode these past two weeks, the real story was fogged out, but now, as I suspected, it was all another incompetent CIA plot and it seems Vlad DID save Erdogan’s life & will reap a large international political harvest from doing so.

Looks like bit of a game changer in the middle east, and the USA could be frozen out.

If that manifests, it explains the increase in media coverage of the China issue, sadly yet more disinformation, and another attempt at WWlll.”

I’ve seen on many other websites that the CIA was supposedly behind the coup in Turkey, also that Russia has warned Erdogan.

If that was indeed a coup by the CIA, then it’s preparation and execution has been amateurish, so amateurish that I can only conclude that the coup has been planned to fail, so that Erdogan could come up with all those emergency measures.

Also I do believe that Turkey is destined to experience civil war and real war, being sacrificed like a pawn.

And just before all hell will break loose (= WW3)  … “Everything calls peace, Schalom!” 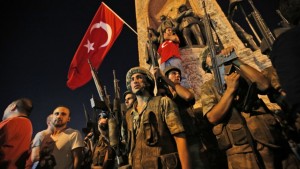 On the evening of July 15, a group of Turkish army officers announced that they had staged a military coup d’etat and had assumed control of the country. They claimed that Erdogan was in a desperate flight for his life and that they were now in the process of restoring order. The only problem for those army officers and their sponsors far away in Langley, Virginia and Saylorsburg, Pennsylvania– where Turkish political operator, Fetullah Gülen, hides in exile under CIA protection–is that they did not succeed. Behind the coup attempt is a far more dramatic story of the huge geopolitical shift that the often unpredictable political survivor, President (still) Recep Erdogan, was in the midst of making when Gülen’s loyalists made their desperate, now apparently failed coup attempt. What follows is a series of Q&A remarks to the background of the dramatic events unfolding in a pivotal part of the geopolitical order.

Q: How would you comment on the events of Friday to Saturday evening, when the army carried out a coup? Are these events were predictable? WE: The coup was a reaction to the recent dramatic geopolitical shift of Erdogan. It was instigated by networks in Turkey loyal to the CIA. It clearly was a desperate move, ill-prepared.

Q: What do you think are the real reasons for such a move of the army? WE: This was a network of officers inside the Army loyal to the Fetullah Gülen Movement. Gülen is a 100% CIA controlled asset. He even lives since years in exile in Saylorsburg, Pennsylvania having gotten safe passage and a green card by former top CIA people like Graham Fuller and the former US Ambassador to Ankara.

Gülen has been a decades-long mad project of the CIA to weaponize political Islam as an instrument of regime change. Recall that in 2013 there were mass protests against Erdogan in Istanbul and elsewhere. That was when Gülen, who previously had made a deal with Erdogan’s AK Party, broke and criticized Erdogan as a tyrant in the Gülen-controlled media such as Zaman. Since then Erdogan has been moving to root out his internal most dangerous adversary, Gülen and friends, including raids on Zaman and other Gülen-controlled media. This is not about a battle between the White Knight and Evil Knievel. It is about power pure in Turkish politics. If you are interested in the details of the Gülen CIA project I urge readers to look in my book, The Lost Hegemon (German: Amerikas Heilige Krieg).

Q: Do you think these events in Turkey could lead to civil war, as interpreted by some commentators? WE: I doubt that. The Gülen Movement in the past two years has been severely reduced in influence by Erdogan and his head of intelligence—purges etc. The traditional so-called Ataturk Army as State Guardian is long gone …since the 1980s.

What is interesting to watch now will be the foreign policy of Erdogan: Rapprochement with Russia, reopening talks on the Russia Turkish Stream gas pipeline to the Greek border. The simultaneous Erdogan rapprochement with Netanyahu. And most critical, Erdogan’s apparent agreement, part of Putin’s demands for resumption of ties, that Turkey cease efforts to topple Assad by covertly backing DAESH or other terrorists in Syria and training them in Turkey, selling their oil on the black market. This is a huge geopolitical defeat for Obama, probably the most incompetent President in American history (even though he has some serious competition for the title from George W. Bush and Clinton).

Q: Do you believe that in this way Erdogan indeed be overthrown? WE: Not likely as it now looks. Even in the early hours when Erdogan was able to tell media that it was a Gülen coup try, I was convinced Gülen would fail. Today, July 16, it seems he has failed. The CIA has egg on its face and Obama and NATO try to cover it up by their “warm embrace of the democratically elected Erdogan (sic!).” They cared not that in Ukraine when the CIA ran the Maidan Square coup in February 2014, that Viktor Yanukovic was the “democratically elected president of Ukraine.” Look at the mess Washington made there in their effort to provoke a split between Russia and the EU.

Q: How should we interpret the information alleged that Erdogan sought asylum in Germany, and do you think that Germany would not approve? WE: There are many wild rumors. I have no information on that.

Q: How do you put the United States and Russia in relation to recent events? WE: It should be clear from what I have said that Washington was behind the coup as their impotent reaction to the major Erdogan geopolitical shift since June, when he fired Davotoglu as Prime Minister and named loyalist Binali Yıldırım. At that point Erdogan simultaneously turned away from the Washington anti-Assad strategy in Syria and towards Israel (who is in a sharp geopolitical conflict with Washington these days), towards Russia and now, even towards Assad in Syria.

Q: What impact on developments has the fact that Turkey is a member of NATO? WE: This is difficult to assess. Washington desperately needs Turkey in NATO for its global strategy, especially in controlling oil flows of the Middle East, and now its natural gas. This is why the moment it was clear the coup would fail, Obama and company “embraced” their “friend” Erdogan. It’s called damage control in intelligence parlance.

Q: Do you believe that it is good for Turkey that Erdogan and the current government is removed in this way, rather than in the elections? WE: By the time I am writing this, it appears he is firmly still in power, perhaps more than before.

Q: How do you think the events in Turkey may affect the European Union? WE: The EU is in the process of dissolving as a project. It was always a monstrous idea, encouraged in the 1950s by Churchill, by the early CIA and their European friends like Monnet, in order for the US better to control Europe. That was obvious when President Obama made his brazen intervention into British politics to tell the British not to exit the EU. The European Union is a monstrous top-down faceless bureaucracy, unelected, unanswerable to the people, sitting in Brussels next to NATO headquarters.

Brexit started the dissolution. It will now go rather fast now is my feeling. Perhaps Hungary will be next if the CIA is not able to do a color revolution against Orban before their October referendum on “Huexit.” France? Marie Le Pen’s supporters and millions of French are fed up with dictates from Brussels. Look at the recent criminal decision, despite huge scientific evidence that glyphosate, the widest-used weed killer in the EU, is carcinogenic, to ignore all health and safety evidence even of EU governments, and arbitrarily re-approve it for 18 more months of poisoning of the food and the population. This is not what the people of Europe or anywhere deserve from their civil servants.

Q: How do you think the events in Turkey may affect the migrant crisis, and do you expect the reopening of so-called Balkan route for refugees? WE: It’s too early to say. If Erdogan and Assad, brokered by Putin and Russia, and perhaps some cooperation from Israel, manage to make true peace in Syria, the refugee flow from the war could cease. People want to return home, rebuild their lives in their own country.