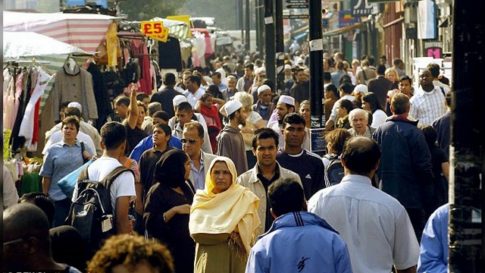 – ‘The Economist’ Celebrates British People Becoming A Minority In Their Own Country:

Don’t “despair” over Brexit, British people will soon be a minority due to mass immigration and lower breeding rates, so says The Economist.

From The Economist (via Diversity Macht Frei):

In 2014, 27% of babies born in England and Wales had immigrant mothers, up from just 12% in 1990. Polish women had more babies than any other immigrant group: they accounted for 3.2% of all births. Pakistanis were second, followed by Indians, Bangladeshis and Nigerians. Many other babies who were born to British women had an immigrant father. Soon these babies will be in school and their parents will be pinned to Britain.

Even if immigration were suddenly to stop, Britain would become more diverse. Immigrants have slightly more babies—their fertility rate in England and Wales is 2.1, compared with 1.8 for the natives. And diversity will spread. Immigrants tend to arrive in big cities and gradually move out, seeking bigger houses that they can afford. Between 2001 and 2011 (the last two census years) the proportion of black Africans in England and Wales who lived in London fell from 80% to 58%—a staggering exodus. Provincial towns such as Milton Keynes are rapidly becoming more racially mixed. 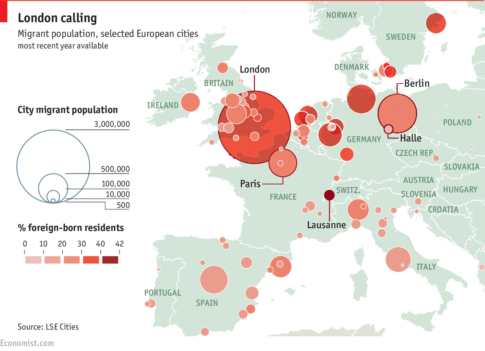 […]As immigrants and their children multiply and disperse, the Britons who most dislike immigration will disappear. Old Britons voted to leave the EU in far greater numbers than young ones; the uneducated were much keener on exit than the educated. Britain is growing older, but this particular cohort of thinly educated old people (call it the UKIP cohort) is ageing out of the population. It will be replaced by successive cohorts that are more ethnically diverse and highly educated. In the early 1960s only 15% of school children got at least five good O-levels; today more than two-thirds get at least five good GCSEs and almost half of young people go to university.

So Britain will gradually change. While you wait for that to happen, though, remember that it is not at present a racist or intolerant country. Britons (including old, white, working-class Britons) might dislike immigration, but they tend also to dislike racism and discrimination. Eurobarometer, which obsessively polls Europeans on their prejudices, consistently finds that Britons are unusually relaxed about the idea of having a non-white political leader or non-white co-workers. The most recent poll, in 2015, found that only Swedes were as calm as Britons at the prospect of one of their children dating a Muslim.

The vote to leave the EU was not a nativist revolution, as nativists fervently hope and liberals fear. It was more a desperate lashing out against the inevitable transformation of British society—the past kicking against the future. The kick hurt a lot. But the fight only ends one way.

It showed how life had transformed in London’s East End due to mass immigration and how white people were being made to leave the homes they lived in for centuries.

“We’ve always been a country where immigration’s been a part, but not on this scale,” one white Londoner said. “I feel that we’ve been ethnically cleansed.”

While the media criticizes ethnic cleansing in places like Turkey and Nigeria, the displacement of white people in the countries their forefathers founded is celebrated.