Having warned earlier of the possibility, Turkish President Tayyip Erdogan on Wednesday announced a three-month state of emergency, saying this would enable the authorities to take swift and effective action against those responsible for last weekend’s failed military coup.  He explicitly focused on the effort across his nation to “effectively tackle the Gulen movement,” as Erdogan stated that there might be more plans to continue coup attempts.

The state of emergency, which comes into force after it is published in Turkey’s official gazette, will allow the president and cabinet to bypass parliament in passing new laws and to limit or suspend rights and freedoms as they deem necessary. The decision has immediately raised fears of more arbitrary arrests, killings and disappearances.

“The aim of the declaration of the state of emergency is to be able to take fast and effective steps against this threat against democracy, the rule of law and rights and freedoms of our citizens,” the president said.

Erdogan, who has launched mass purges of state institutions since the July 15 coup attempt by a faction within the military, said the move was in line with Turkey’s constitution and did not violate the rule of law or basic freedoms of Turkish citizens.

The president added that “citizens should have no concerns for democracy,” and warned ratings egency S&P “not to mess with Turkey” and comforted his citizens that a “state of emergency does not mean military rule” and that the decision was not against the constitution. Erdogan said regional governors would receive increased powers under the state of emergency, adding that the armed forces would work in line with government orders.

But most amusingly, Erdogan promptly warned S&P, which earlier today downgraded Turkey to BB, “not to mess with Turkey” and that the decision to downgrade the country was political.

Finally, he lashed out at Europe, “which he said does not have the right to criticize this decision,” anticipating expressions of “concern” from the European Union, which has become increasingly critical of Turkey’s rights record and has urged restraint as Ankara purges its state institutions since the abortive coup.

Erdogan made his announcement in a live television broadcast late on Wednesday evening in front of assembled government ministers after a meeting of the National Security Council that lasted nearly five hours. Speaking through an interpreter in an interview with broadcaster Al Jazeera, Erdogan dismissed suggestions that he was becoming authoritarian and that Turkish democracy was under threat.

“We will remain within a democratic parliamentary system. We will never step away from it,” he said.

Meanwhile, over 60,000 people in Turkey have been arrested, detained, suspended or fired in the last 4 days.

A full summary of his key talking points, courtesy of Bloomberg

As Erdogan was making his announcement, the Turkish Lira has crashed to 3.10 – a new all time low against the USD 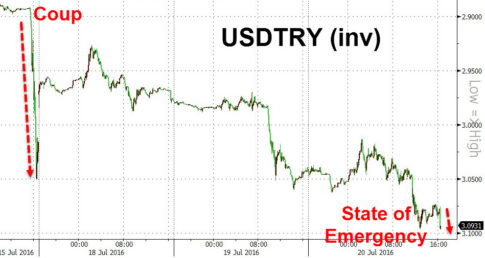