Is the US Marines Corps running out of cannon fodder? 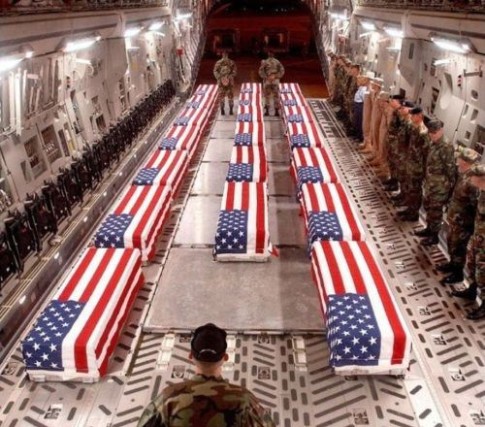 – US Marines To Accept Chubbier Women:

In an effort to maintain the new status quo of cutting standards everywhere in the name of equality and “progress”, the Marine Corps announced major changes over the Fourth of July holiday weekend regarding how much it will allow service members to weigh, and the biggest shift comes for women: going forward “larger” ladies will be allowed to defend the country while also standards used within the physical fitness test will also be relaxed.

In a document released by USMC Fitness division, the new height and weight standard took effect on July 1, 2016 and is relaxing regulations to increase the pool of potential parties. Think of it as a covenant lite loan in a way… only “heavy.”  Why would the US do this?  One could be excused for understandably saying that the US is becoming more progressive and is accommodating those who have the heart to serve but not necessary the physical capability.

We see a different reason for the US to be relaxing admission tests, which is this chart highlighting weak capacity from the Heritage US Military Strength Index:

What’s changing? According to the Washington Post, the Marine Corps will now allow chubbier women to, so to say, slip through the cracks.

The Corps is also relaxing the rules on pull-ups. The new rule will eliminate fixed-arm hanging as an alternative choice to pull-ups for women. In place of fixed-arm hanging women, and men, will have the option to choose push-ups instead. The incentive remains skewed toward the more demanding pull-up, as Military.com explains:

“‘Push-ups become an option on the PFT, but Marines are incentivized toward pull-ups, as these are a better test of functional, dynamic upper body strength and correlate stronger to physically demanding tasks,’ Marine Corps Commandant Gen. Robert Neller said in an administrative message to the Corps released Friday. ‘Push-ups are also a valid exercise and good test; however maximum points can only be earned by executing pull-ups.'”

“The hybrid pull-up option is the Marines’ solution to a four-year conundrum of how to promote pull-ups for all Marines without making it impossible for women to succeed.”

As we march further into a state of “gender equality” there is nothing wrong with admitting rules need to be eased but when it comes to defending a nation, is the best answer really to just relax the standards?  When we observe banking institutions do that with their prequalification requirements, the results are virtually always disastrous and in the last prominent case, led to a bailout of the entire financial system.

Who will bailout the US military if pudgy push comes to shove.

Either way, these are the new rules.  We have reported extensively on robots replacing workers and as that trend spreads deeper into the workforce, expect the American military to relax admission requirements even further to “help” accomodate even greater enlistment numbers by those who have been recently displaced by a robotic “Johnny 5” barrista.

1.  Last November we began a comprehensive review of physical fitness and body composition standards.  Subsequent efforts focused on developing a physical fitness program that incentivizes behavior toward an end state of a healthy and fit force able to better answer the call in any clime and place.  The review was a collaborative effort that drew from fitness experts and Marines, and provided wide-ranging options for consideration.

2.  As a result, a number of PFT and CFT changes are being implemented that ensure standards are relevant, challenging, and also allow for greater distinction between Marines of different fitness levels and age groups.  There are significant adjustments to the PFT and CFT scoring tables, requiring most Marines to demonstrate greater performance to meet the new minimum and maximum standards.  A major change to the PFT is the elimination of the Flexed Arm Hang for females and incorporation of a push-up / pull-up hybrid event for all Marines, recruits, and officer candidates.  Push-ups become an option on the PFT, but Marines are incentivized toward pull-ups, as these are a better test of functional, dynamic upper body strength and correlate stronger to physically demanding tasks.  Push-ups are also a valid exercise and good test; however maximum points can only be earned by executing pull-ups.  These changes go into effect 1 Jan 2017.

4.  Other changes to BCP include modifying the maximum allowable weight limits for female Marines, use of more precise tape measuring devices and de-centralizing BCP waiver granting authority from Manpower and Reserve Affairs (Manpower Management) to the first General Officer in a Marine’s chain of command.  These BCP changes go into effect immediately.

6.  America expects its Marine Corps to be the most ready when the Nation is least ready.  Collectively, these are the biggest changes to the PFT since 1972 and CFT since 2009.  We will monitor the effects of these adjustments for two years and then adjust if required to ensure our standards continue to contribute to the effectiveness of our force and enhance our ability to respond when our Nation calls.