In a stark flashback to the catalytic event that ultimately brought down Bear Stearns in 2008, and subsequently unleashed the greatest financial crisis in history, last night we reported that Standard Life, has been forced to stop retail investors selling out of one of the UK’s largest property funds for at least 28 days after rapid cash outflows were sparked by fears over falling real estate values.

As we further noted, citing an analyst, “given the outflows the sector seems to be experiencing, this could well put downward pressure on commercial property prices,” said Laith Khalaf, senior analyst at Hargreaves Lansdown. “The risk is this creates a vicious circle, and prompts more investors to dump property, until such time as sentiment stabilises.”

As we concluded, whie Brexit is not a Humpty Dumpty event, where all the Fed’s horses and all the Fed’s men can’t glue the eggshell back together, it is an event that forces investors to wake up and prepare their portfolios for the very real systemic risks ahead. And, indeed, if Standard Life was the first domino, moments ago the second domino also tumbled when as Bloomberg reported that Aviva Investors Property Trust is as of this moment “frozen” citing “extraordinary” market conditions.

As the FT adds, Aviva Investments said it had prevented retail investors from selling out of its £1.8bn UK Property Trust since Monday afternoon.

Cited by Bloomberg, Aviva said in an email that “market circumstances, which are impacting the wider industry, have resulted in a lack of immediate liquidity” adding that “we have acted to safeguard the interests of all our investors by suspending dealing in the fund with immediate effect…. Suspension of dealing will give Aviva Investors greater control in managing cash flows and conducting orderly asset sales in order to meet our obligations to investors.”

As Bloomberg reports, M&G suspends trading in property portfolio, feeder funds, according to statement on website.

“Investor redemptions in the fund have risen markedly because of the high levels of uncertainty in the U.K. commercial property market since the outcome of the European Union referendum.

Redemptions have now reached a point where M&G believes it can best protect the interests of the funds’ shareholders by seeking a temporary suspension in trading.”

Henderson temporarily suspends all trading in the Henderson U.K. Property PAIF and the Henderson UK Property PAIF feeder funds to safeguard the interests of all investors, according to statement.
Decision due to “exceptional liquidity pressures” after Brexit and recent suspension of other direct property funds

As The FT reports,

Columbia Threadneedle, the £323bn asset manager, has also confirmed it had suspended redemptions from its Threadneedle UK Property fund, blaming uncertainty in the UK property market following the referendum.
The company said in a statement:

We have not been immune to the recent trend of retail outflows from the sector and so far these requests have been met from the cash balance retained within the Threadneedle [fund].

However, it is expected that these requests to sell will continue for the time being due to uncertainty in the market following the UK referendum result, therefore the temporary suspension of dealings allows sufficient time for the orderly sale of assets, and protects the interests of all investors.

Prices were already tumbling before they halted trading… 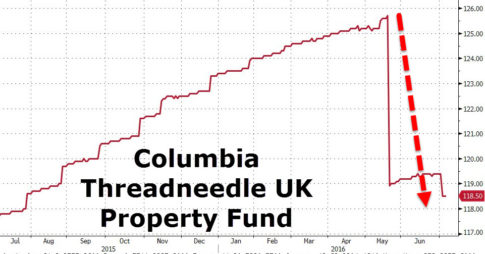 Canada Life said it suspended dealing in its £222 million property fund to “protect the interests of all investors in the property funds”.

It added in an alert to financial advisers: “We did not take this decision lightly as we understand how this may affect you and your clients. We will endeavour to lift the deferral as soon as practically possible.”

Canada Life said it would be deferring requests for withdrawals from its commercial property fund from 3pm on Tuesday, for up to six months.

Other firms are expected to follow suit as the investor exodus picks up.

But the Investment Association has sought to allay concerns, saying earlier this week that the ability to suspend trading “prevents fund managers from being forced to sell, in this case property interests, too rapidly and helps them achieve a better outcome for all their clients”.

We are less sure that this will ‘calm’ anything and as Laith Khalaf, a senior analyst at Hargreaves Lansdown cited above, put it, “the dominoes are starting to fall in the U.K. commercial property market, as yet another fund locks its doors on the back of outflows precipitated by the Brexit vote. It’s probably only a matter of time before we see other funds follow suit.”

And they are… in a hurry.