This is NOT an official “Make America Great Again” cap … 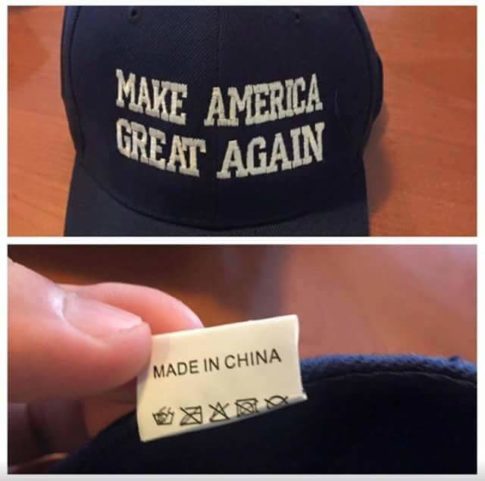 Donald Trump’s caps are manufactured in the USA:

Made in China?! Say it ain’t so, Donald.

Hold onto your plastic snap enclosure. It’s not true.

The hat that launched a barrage of snarky social media posts after its July debut at a Texas campaign event has also launched a host of imitations.

“The image you shared is not an official campaign product,” Trump spokeswoman Hope Hicks told PunditFact  in an email. “All product for sale on DonaldJTrump.com is made in the USA.”

Hicks confirmed a couple of other facts about the authentic Trump campaign hat, sold for $25-$30 in patriotic and camouflage shades at the campaign store.

The hats are made by Cali Fame of Los Angeles, which makes the Cali Headwear brand. Trump’s hat is based on the Patriot 5 model, and no surprise, it’s been a bestseller this year, though not a bestseller of all time. Cali Headwear co-owner Brian Kennedy told us that hats his company made for Von Dutch and Ed Hardy sold better.

Oh, and they are made in the USA.

It’s true that a number of unofficial “Make America Great Again” hats are currently available for sale on Amazon, and some of those hats were indeed manufactured in China. For instance, one review for a product sold by “Trump 16” (no affiliation with the Trump campaign) confirms that some of the unofficial “Make America Great Again” hats were not made in America: